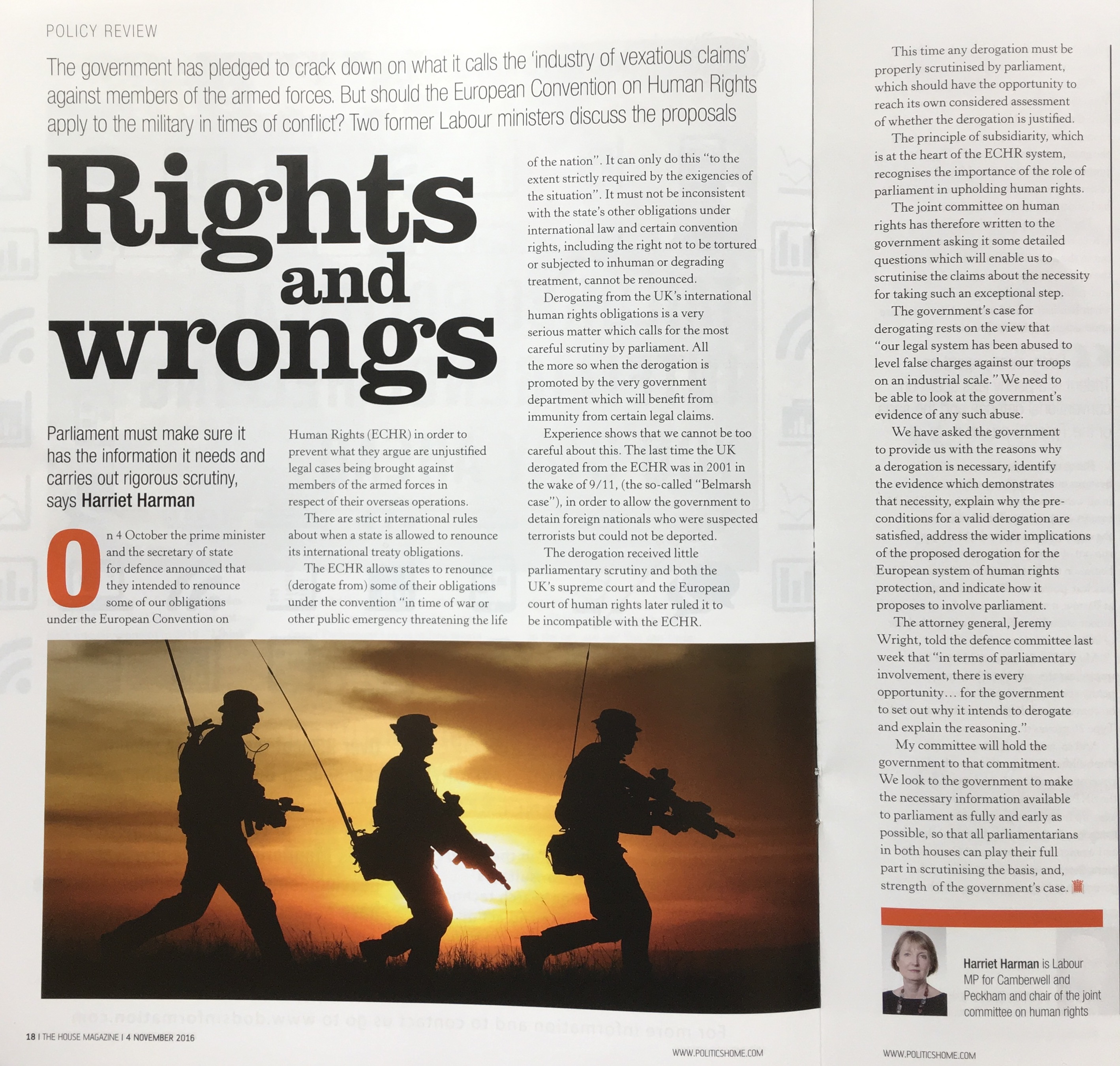 On 4th October the Prime Minister and the Secretary of State for Defence announced that they intended to renounce some of our obligations under the European Convention on Human Rights (ECHR) in order to prevent what they argue are unjustified legal cases being brought against members of the armed forces in respect of their overseas operationS.

The ECHR allows states to renounce (derogate from) some of their obligations under the convention “in time of war or other public emergency threatening the life of the nation”. It can only do this “to the extent strictly required by the exigencies of the situation”. It must not be inconsistent with the state’s other obligations under international law and certain convention rights, including the right not to be tortured or subjected to inhuman or degrading treatment, cannot be denounced.

Derogating from the UK’s international human rights obligations is a very serious matter which calls for the most careful scrutiny by parliament. All the more so when the derogation is promoted by the very government department which will benefit from immunity from certain legal claims.

Experience shows that we cannot be too careful about this. The last time the UK derogated from the ECHR was in 2001 in the wake of 9/11, (the so-called “Belmarsh case”), in order to allow the government to detain foreign nationals who were suspected terrorists but could not be deported.

The derogation received little parliamentary scrutiny and both the UK’s Supreme Court and the European Court of Human Rights later ruled it to be incompatible with the ECHR.

This time any derogation must be properly scrutinised by parliament, which should have the opportunity to reach its own considered assessment of whether the derogation is justified.

The principle of subsidiarity, which is at the heart of the ECHR system, recognises the importance of the role of parliament in upholding human rights.

The Joint Committee on Human Rights has therefore written to the government asking it some detailed questions which will enable us to scrutinise the claims about the necessity for taking such an exceptional step.

The government’s case for derogating rests on the view that “our legal system has been abused to level false charges against our troops on an industrial scale”. We need to be able to look at the government’s evidence of any such abuse.

We have asked the government to provide us with the reasons why a derogation is necessary, identify the evidence which demonstrates that necessity, explain why the preconditions for a valid derogation are satisfied, address the wider implications of the proposed derogation for the European system of human rights protection, and indicate how it proposes to involve parliament.

The Attorney General, Jeremy Wright, told the Defence Committee last week that “in terms of parliamentary involvement, there is every opportunity… for the government to set out why it intends to derogate and explain the reasoning”.

My committee will hold the government to that commitment. We look to the government to make the necessary information available to parliament as fully and early as possible, so that all parliamentarians in both houses can play their full part in scrutinising the basis, and, strength of the government’s case.