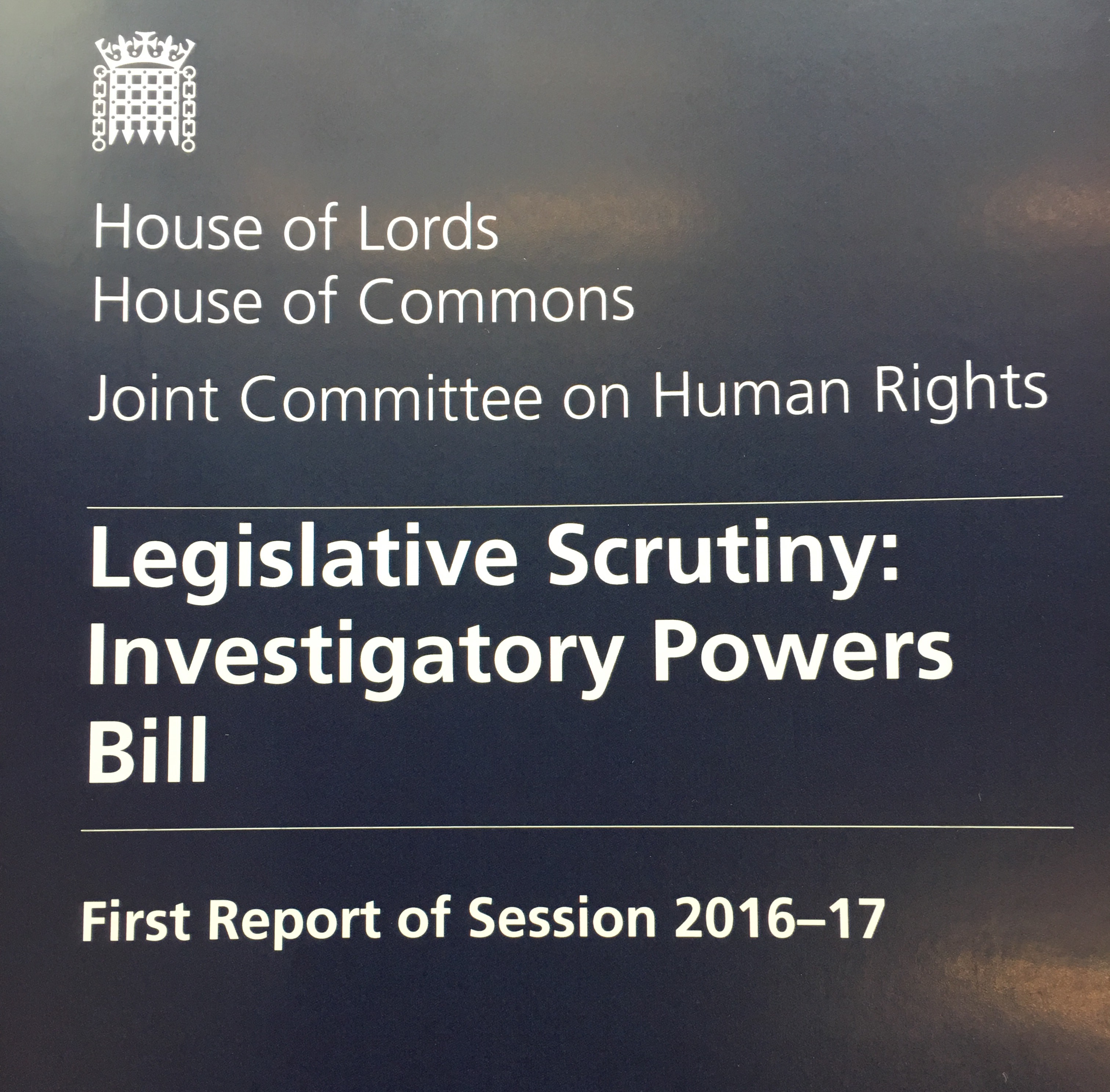 Overall the Joint Committee on Human Rights welcomes the steps which the Bill takes towards providing a clear and transparent legal basis for the investigatory powers already used by the security and intelligence agencies and law enforcement authorities, and towards enhanced safeguards. But the Bill could be improved to enhance further the compatibility of the legal framework with human rights, says a report published today.

Bulk Powers
On the current state of the case law of the European Court of Human Rights the Committee does not consider the bulk powers in the Bill to be inherently incompatible with the right to privacy (Article 8): they are capable of being justified if they have a sufficiently clear legal basis, are shown to be necessary, and are proportionate in that they have adequate safeguards against arbitrary use. The Committee welcomes the Government’s publication of a detailed operational case [link] and recommends that it should be reviewed by the Independent Reviewer of Terrorism Legislation, who should report before the Bill completes its passage, and thereafter every five years on whether there is a continuing need for the bulk powers.

Thematic Warrants
The Committee recognises the value of warrants which extend to people or places that are unknown at the time the warrant is issued (“thematic warrants”), but considers that the clauses concerning the subject matter of targeted interceptions and targeted equipment interference warrants are too broadly drafted: the description in the warrant must be sufficiently specific to enable any person unknown to be identified and to prevent the possibility of large numbers of people being potentially within the scope of a vaguely worded warrant. As presently drafted, anyone who is part of “a group of persons who share a common purpose” can be the subject of a warrant, and there is nothing in the Bill to prevent the group being defined so broadly (for example, protesters) as to extend to very large numbers of unidentified people.

MPs
A key role of Parliament is to hold the Government to account and the Bill must provide sufficient safeguards to prevent the Government from abusing its powers of surveillance in a way which undermines the legislature’s constitutional role.  Members of the public should also be able to expect their communications with members of Parliament to remain confidential.  The Committee does not believe that consulting the Prime Minister before interference with communications of Members of Parliament provides an adequate safeguard: in addition the Speaker or Presiding Officer of the relevant legislature should be given sufficient notice of the decision to interfere with such communications to enable them, if they so wish, to be heard before the Judicial Commissioner. As well as the House of Commons, this includes the House of Lords, the devolved legislatures and the European Parliament.

Lawyers
More robust safeguards are needed for lawyer-client confidentiality.  Preserving the “iniquity exception” to legal professional privilege – where communications concerned with furthering a criminal purpose are not legally privileged – makes it unnecessary for the Bill to provide for targeting confidential communications between lawyers and clients and the Committee recommends that those provisions be removed from the Bill. The Committee also recommends strengthening the safeguard for legally privileged items which are likely to be included in intercepted communications, with the insertion of a threshold test reflecting the strong presumption against interference.

Journalists’ sources
While recognising the real difficulty of defining journalism in the digital age, the Committee is concerned that safeguards for journalists’ sources (in the Bill) are inferior to similar safeguards in other contexts: the Bill should provide the same level of protection for sources as currently exists in relation to search and seizure under PACE 1984, including an on notice hearing before a Judicial Commissioner, unless that would prejudice the investigation.

Separation of functions: authorisation and inspection
The Committee believes that the new system of oversight should provide for a clear separation of function between the prior judicial authorisation of warrants and ex post inspection and review. The Committee recommends that the Investigatory Powers Commissioner should have a duty to ensure that these two distinct functions are carried out by different Commissioners.

“The Bill provides a clear and transparent basis for powers already in use by the security and intelligence services, but there need to be further safeguards. Protection for MP communications from unjustified interference is vital, as it is for confidential communications between lawyers and clients, and for journalists’ sources, the Bill must provide tougher safeguards to ensure that the Government cannot abuse its powers to undermine Parliament’s ability to hold the Government to account.”