The Lib Dems are guilty of breaking their promises to voters - on VAT, tuition fees and police cuts.

They are guilty of colluding with the Tories - on tax cuts for the rich and tax credit cuts for low income families.

And they are guilty of duplicity - purporting to protest against Tory-led Government decisions which they have voted for, and which would not have been able to be pushed through without the votes of the Lib Dems themselves.

They have been caught yellow-handed and we are warning people not to trust them again but to vote Labour on May 3rd.

Today I launched a document exposing how the Liberal Democrats are saying different things to different people in different parts of the country: Caught Yellow-Handed.

The Government has cut the Arts Council's funding by 30%, they've squeezed local councils who fund local arts organisations and they've abolished the Regional Development Agencies that helped arts organisations get funding. They said that philanthropy would fill the gap - but now they are threatening vital philanthropic support for the arts with their tax changes.

This is a problem for arts organisations both big and small and both in London and in the regions who are all finding it harder to attract the charitable funds they need at the same time as their funds from public sources are being cut.

The arts are a key part of Britain's identity but their future is now threatened. The Government has not thought this through. But as the cap on tax relief for philanthropic donations is not due to come into force until next year there is still time for the Government to listen, think again and support important charitable giving to the arts.

Arts organisations are concerned about the cap on tax relief for philanthropic donations announced in this year's budget.  I have written to Jeremy Hunt, Secretary of State for Culture, Media and Sport, calling on the Government to reconsider these changes. The text of my letter is below.

There is a great deal of concern among arts organisations and supporters of arts and culture throughout the country about the cap on tax relief for philanthropic donations announced in this year’s Budget.

As Secretary of State for Culture, Media and Sport, you have purported to champion philanthropy for the arts. Indeed, the ‘total amount of charitable giving’ is one of the four ‘impact indicators’ for your Department’s success.

With government cuts to the arts – cutting the Arts Council’s funding by 30%, squeezing local councils who fund local arts organisations and abolishing the Regional Development Agencies that helped arts organisations get funding – private giving is even more important.

In light of this, I would be very grateful if you could answer the following questions:

I share the concerns of arts organisations across the country about the impact of this tax relief cap, on top of the public funding cuts which have already started to bite. The changes proposed in the Budget go against everything you have previously argued for, and further threaten the future of the arts in this country, arts which are a key part of British identity.

With the changes not due to come in until next year, there is still time for the Government to listen, think again and support important charitable giving to the arts. I urge you to reconsider the tax relief cap and stand up for the arts and culture. 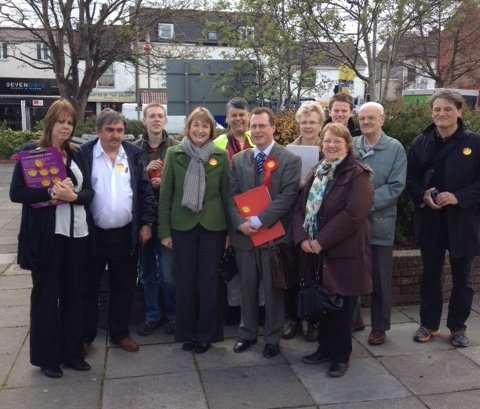 I welcome the Riots Communities and Victims Panel report, which rightly looks at issues from policing to community resilience, unemployment to parenting.

The report echoes many of the concerns I heard from people in Camberwell and Peckham following the terrible riots in August.

Local people said that the three things that would make riots less likely in future are more youth services, less unemployment and more police. But the Government is cutting funding for youth services, cutting the number of police and standing by while unemployment rises.

Seven months on from the riots, this report shows once again how the government is making decisions which are making things worse, rather than better.

The achievements of the UK's creative industries as well as the challenges facing the sector faces were centre stage today at the Creative Coalition Campaign's conference at BAFTA.  I joined a panel with John Whittingdale MP and Don Foster MP to discuss the role of public policy in creative growth with Christine Payne from the CCC chairing the discussion. 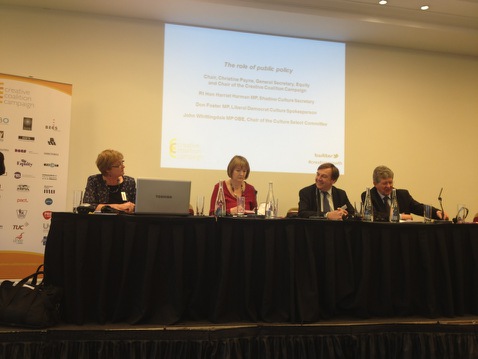 I have written to the Prime Minister, asking for Jeremy Hunt’s conduct in overseeing the News Corporation bid for BSkyB to be referred to the Independent Adviser on Ministers’ Interests; to Jeremy Hunt MP, asking him to release texts and emails about the bid to parliament; and to Lord O’Donnell, to ask him whether he still regards it as appropriate for Jeremy Hunt to have taken on his quasi-judicial role in the BSkyB deal.

You can read my letters below.

On 25 April I wrote to you and asked you to refer to Sir Alex Allan, the Independent Adviser on Ministers’ Interests, the conduct of the Secretary of State for Culture, Media and Sport, Jeremy Hunt MP, in respect of his responsibility for News Corporation’s bid for BSkyB.

Your spokesman has said that you have ‘no plans’ to do so, as you believe the Secretary of State acted ‘properly’ and ‘there is an inquiry ongoing that is looking at some of these issues and we should let that inquiry take its course’.

Lord Justice Leveson's Inquiry is of the greatest importance.

But the Leveson Inquiry:

When you took office and published the new edition of the Code, you said your Government must be ‘...Transparent about what we do and how we do it. Determined to act in the national interest, above improper influence. Mindful of our duty...’.

The Ministerial Code is important. But it is worth nothing if you do not fulfill your responsibilities to uphold it.

You should now refer the Secretary of State for Culture, Media and Sport to the Independent Adviser on Ministers’ Interests for three breaches of the Ministerial Code:

failing to take responsibility for the actions of his Special Adviser, contrary to paragraph 3.3;

On 26 April I wrote and asked you to publish:

I now understand that you intend to make some of these documents available to the Leveson Inquiry.

It is not acceptable for you – while being prepared to release these documents to the Leveson Inquiry – to refuse to release them to the House of Commons, to whom you are accountable.

So I am asking you to place them in the House of Commons Library at the same time as you give them to the Leveson Inquiry.

It was in the House on 25 April that you acknowledged that what your Special Adviser did was wrong, but you were unaware of what he was doing. It is therefore the House that needs to see the correspondence that shows this to be the case.

There can be no possible explanation for your preparedness to give these documents to the Leveson Inquiry but refusal to give them to the House, other than that you are evading your accountability to the House for your actions as Secretary of State.

You should publish all of these documents, as I requested in my letter of 26 April.

On 22 December 2010, John Denham MP wrote to you asking whether Jeremy Hunt MP was a fit and proper person to rule on the News Corporation bid for BSkyB in light of previous comments he had made. You replied on the same day saying that following legal advice, you were satisfied he had not prejudged the case.

In light of the documents released by the Leveson Inquiry on Tuesday 24 April, which reveal the extent of contact between Jeremy Hunt’s Special Adviser and News Corporation, do you still regard it appropriate for Mr Hunt to have taken on a quasi-judicial role because of the risk of the perception that Mr Hunt would not have been impartial?

Below is a link to my interview with Andrew Neil on Sunday Politics, discussing Jeremy Hunt, the BSkyB bid and the Ministerial Code:

Below you can read my comment on today's statement by Downing Street concerning Jeremy Hunt:

"It was always the case that it is the Prime Minister's responsibility to ensure Ministers adhere to the Ministerial Code - not Lord Justice Leveson.

"Now Downing Street is saying that the Prime Minister will wait until Jeremy Hunt has given evidence to the Leveson inquiry before he decides whether to refer the case to the independent advisor.

"David Cameron is delaying the decision he knows he should make and is ducking his responsibility."

The Culture, Media and Sport Select Committee today published its report on 'News International and Phone-hacking'.

The findings of today's Select Committee report add new urgency and importance to Ofcom's current review of whether News Corporation is "fit and proper" to hold a broadcasting licence.

When you hold a broadcasting licence you are in a position of power and with that must come responsibility.  I have no doubt that Ofcom will examine today's findings with the utmost seriousness.

Ofcom announced in July 2011 that it would be monitoring the situation closely as to whether News Corporation remained a ‘fit and proper’ person to hold a broadcast licence. It emerged in March 2012 that Ofcom had appointed a dedicated team of investigators for this purpose, ‘Project Apple’, at the start of 2012.

Ofcom's responsibility to apply the "fit and proper person" test is set out in s3(3) Broadcasting Act 1990 and 1996. Under those acts:

'Ofcom:
‘a) shall not grant a licence to any person unless satisfied that the person is a fit and proper person to hold it ; and
‘b) shall do all that they can to secure that, if they cease to be so satisfied in the case of any person holding a licence, that person does not remain the holder of the licence.’