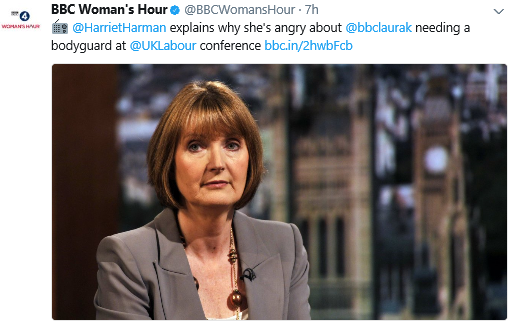 This morning I was interviewed on BBC Radio 4’s Woman’s Hour about the unacceptable abuse of Laura Kuenssberg women MPs and journalist face and the requirement for Laura Kuenssberg to have a bodyguard at Labour Party Conference.

You can listen to the interview here.

HH: I do, and I think it’s a real moment where we need to really analyse what the issue is and take action. Because, there are a number of fundamental things here. One is, we should value, absolutely as a fundamental part of our democracy, that we have independent political reporting and I don’t want any reporter, man or woman, to be looking over their shoulder and fearing what they are going to be broadcasting in their commentary on the evening’s television, because somehow there might be a backlash of abuse or even threatened violence against them.

JG: I’d imagine actually that it’s just impractical for somebody like Laura to operate with a bodyguard with her the whole time.

HH: Well I think so, it is a particular issue for women, high profile women, in the public domain and in journalism. I think that Cathy Newman had problems as well with harassment and people taking against her view. And of course, if Cathy or Laura were only to stay at home and look after the children then they wouldn’t have this problem but their temerity of being out in the public domain, doing what has been hitherto a men-only job and being opinionated and out there, I think it attracts, and this really should be tackled, people trying to shut them down, silence them and push them out. And I think it is a chilling idea that at Labour’s conference the BBC’s political editor feels that she needs to have protection and this has now been highlighted. I mean it might be that she is going to feel the same at the Tory Conference and other conferences, but this is our conference they’re happening at and we’ve all got to take action together.

JG: Is it simply that some current member of the Labour Party, specifically male, are so thin skinned that they can’t live with any form of objective reporting?

HH: Well I think that it is a red herring for political parties to be deciding that the BBC is their enemy. The BBC is independent, it is highly regulated, as are the other broadcaster, and our task is to get our argument out, not to actually criticise the broadcasters. We should be supporting them in doing their jobs. Now I don’t know how much it is a problem of men in the Labour Party doing this, or whether its cross-party. We do know that Labour women MPs have been subject to vile harassment and abuse and even criminal acts, as in deed have Tory women MPs. I think that it’s a cross-party issue, but it’s a gender issue and it relates to women in politics whether they are like Laura or Cathy and are journalist and reporters or whether they be women politicians. You know in other countries we send observers, if there is an election in Africa we send observers to see whether or not there is a free press; see whether or not candidates are able to go about their business and then we report back. Well what would people make of situation where the BBC’s Political Editor has to have protection at a party conference.

JG: Can I just quote, you mentioned this on Twitter yesterday and some of the tweets in reaction to your original tweet do tell a story? Urm. Here is one… ‘What evidence is there whatsoever that Laura Kuenssberg needs protection at the Labour Conference. Is it just another example of fake news?’. Somebody else: ‘Laura is a mouthpiece for the Tories. She has no shame and is quite happy to give out misinformation to smear Momentum’. And maybe, Harriet Harman, John McDonnell didn’t help out much, he was really appearing to make light of the issue. I think he suggested that ‘anyone who harassed Laura Kuenssberg should be told that John McDonnell will sort them’. That’s not brilliant either is it?

HH: Well I think that people need to think about and you know people make those sort of remarks on twitter, but actually this is fundamentally very serious, because everyone should value a free press, fearless political reporting and a democracy where women are able to play their part on equal terms. And this is fundamental. This is about more than just Laura as an individual, it’s actually about whether we are going to have independent political reporting and whether women can work alongside men in politics, whether as reporters or as politicians. And all parties should play their part in this. And the idea that that we pick up one individual and say it’s her fault because she is a Tory, which she obviously isn’t, she’s an independent reporter, or this is a problem only of right-wing extremism or this is a problem only within the Labour Party. I mean were not going to get anywhere if we like, you know, picket it like that. We’ve got to recognise that this is an overall problem, and there are a number of organisations which need to step forward and pay their part in this, and I would say that the political parties should all sit down with the BBC and say ‘what is going on here?’, they can have a meeting with the BBC and say ‘what is going on?’, ‘what has Laura been subjected to?’ and then discuss how they themselves can address it with each of the political parties. I think Ofcom, who actually regulates broadcasting, they should be looking at women in broadcasting, why do we deal with it Cathy Newman one day, Laura Kuenssberg the next. This is across the media. We need to look at it and I think that Yvette Copper’s select committee, the Home Affairs Select Committee is looking at this and that ought to be fed in and also Maria Miller, who is the chair of the Women and Equalities Select Committee. But I think that this is very fundamental and you know I hate it when people say ‘oh we don’t what party political points scoring’ because I a very party animal and very partisan, but the truth is that this is something which is cross-parties but which is very, very specifically about gender. And we’ve got to make sure that we don’t turn a blind eye and we don’t retreat into our party identity.

JG: No one is accusing you of doing that Harriet. Thank you very much for talking to us.