Thank you to the thousands of people in Camberwell and Peckham who have taken the time to write to me on this important issue.

I consistently voted against the Prime Minister’s deal because I was concerned it would not protect jobs, workplace rights or environmental standards, nor ensure frictionless trade for British businesses.

MPs voted on “indicative options” for the next steps in the Brexit process after the third defeat of the Prime Minister’s deal. I voted for a Customs Union, to Revoke Article 50 and for a people’s vote: 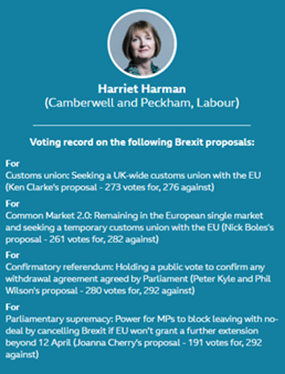 Unfortunately none of the proposals earned a majority in the second round of "indicative votes".

I don’t think there’s any deal which is better than the one we have now as an EU member. I have great fears for a No Deal Brexit which would cause a national emergency and devastation to those on low incomes, the vulnerable and those who lose their jobs.

A people’s vote would break the logjam but I would be concerned that it must not have No Deal on the ballot paper.

I think 3 years on from the narrowest of referendum results revoking Article 50 would certainly be better for the country than No Deal.

Please be assured I will continue to work with MPs across the House to oppose No Deal being forced on the country.

As your elected representative in Parliament, I welcome your views and comments throughout this process.