Government announces Parliament to get vote on baby leave for MPs 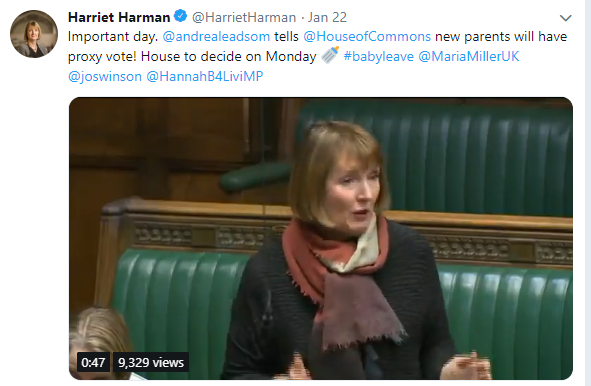 I am delighted that the Government has announced that MPs will get the chance to vote to approve a one year pilot on voting rules for MPs who have had a baby or adopted a child on Monday 28th January 2019 - almost a year after Parliament first agreed to implement proxy voting for new parents.

This would be a small steps into the 21st century, which is long overdue. Women MPs who fought to get into parliament don't want to be excused, they want to exercise their votes and represent their constituents.

We don't want tiny babies to have to be brought into the division lobbies for these important Brexit votes, nor is it acceptable for women to be excluded from voting.

It sets a terrible example that the babies of men in parliament are invisible and now that's not what men MPs want either.

My speech in the Urgent Question in the House Commons to welcome the Government announcement:

This has been a collective endeavour. First, I would like to pay tribute to the hon. Member for East Dunbartonshire (Jo Swinson), who has been a champion of this for pressing reasons and reasons of principle. I thank her for securing this urgent question, and thank you for granting it, Mr Speaker. You have always been on the side of progress in respect of parents. As the hon. Member for Morley and Outwood (Andrea Jenkyns) said, you were a champion of the crèche here, and she explained why this measure is so necessary.​

It is 31 years too late for me, but I am delighted about this, because it is really important. There are many babies of Members on both sides of the House in the offing. They are blissfully unaware of the Brexit debate, but these Brexit babies cannot wait, so I am delighted that we are getting on with it.

Finally, I pay tribute to the Leader of the House, who I am in no doubt has always been on the right side of the argument. I point out that I, too, was Leader of the House, and I failed to get this through. Whoever succeeds in these long decades of progress and these baby steps into the 21st century, all power to your elbow.