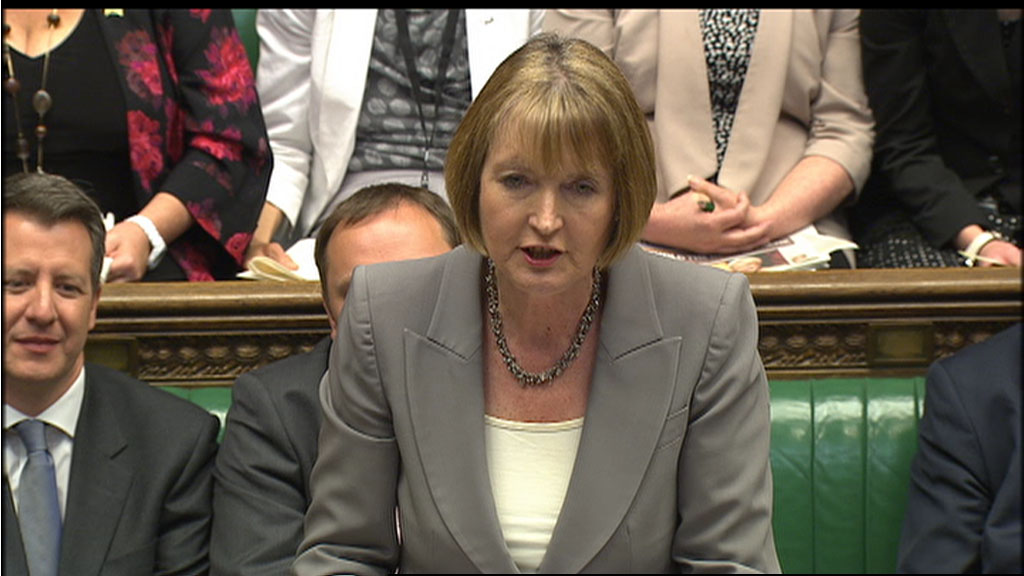 Today in the House of Commons, at Prime Minister's Questions, I challenged David Cameron's opposition to allowing 16 and 17 year olds the right to vote in his proposed EU referendum.  I also raised his promises on child care, and the idea of shared parental leave with grandparents.

Ms Harriet Harman (Camberwell and Peckham) (Lab): Last night, the House agreed that there should be an EU referendum, but it has to be done in the right way and it has to be fair. First, on the issue of who can vote, why will the Prime Minister not let 16 and 17-year-olds vote? This is about the future of our country. They did in the Scottish referendum. It is their future too.

The Prime Minister: First, may I thank the right hon. and learned Lady and all those Labour MPs who joined us in the Division Lobbies last night? After five years of opposing a referendum, to watch them all trooping through was like seeing the biggest mass conversion since that Chinese general baptised his troops with a hosepipe. It was very impressive.

On 16 and 17-year-olds, I believe this House should vote on that issue. The Conservative manifesto is clear and my position is clear: I think we should stick with the current franchise at 18, but the House of Commons can vote.

The right hon. Gentleman and I both want to see a yes vote, but it is essential that the referendum is fair and is seen to be fair, so why are they changing the law to exempt the Government from the rules which are there to ensure the Government do not inappropriately use public funds or the government machine in the short campaign. Will he think again on this?

The Prime Minister: The right hon. and learned Lady is right that it was an excellent debate last night. A lot of important issues were raised, and they can be discussed in Committee. Let me answer directly this issue of purdah, because all the concerns raised can be addressed. There are two reasons for looking at this carefully and taking the proposals we put forward. First, as the Europe Minister said, because the European issue is so pervasive, I do not want a situation where, in the four weeks before a referendum, Ministers cannot talk about the European budget, make statements about European Court judgements, respond to European Councils and all the rest of it. That seems a very real danger, as the Europe Minister set out last night.

The second issue is a bigger one. When the negotiation is complete and the Government have taken a clear view, I do not want us to be neutral on this issue; I want us to speak clearly and frankly. In the last few weeks before the Scottish referendum, the UK Government were often being advised that they could not take a view on the future of the UK. I think that was a ridiculous situation, which is why we have proposed changes to the purdah rules. However, the right hon. and learned Lady raises an important question, and it will be debated in the House, but I have set out the position as I see it.

Ms Harman: The problem is that it is not a change in the rules, but a blanket exemption. We must have a legal framework in the Bill. We cannot rely on ministerial restraint.

The Electoral Commission said that the referendum should not be on the same day as any other election, and we strongly agree. This is an important constitutional issue that should be considered on its own. Will the Prime Minister guarantee a separate voting day for the referendum?

Ms Harman: Apropos the negotiations, we are talking about whether the referendum should take place on the same day as other elections. The Prime Minister mentioned the AV referendum. We agree with the Electoral Commission that it was not right that it was held on the

same day as other elections, but we will have the opportunity to consider these issues further in the G7 statement coming next.

I would like to turn to an issue important to many families across the country. Before the election, the Prime Minister promised that his tax-free childcare policy would be launched this autumn. Is he on track to meet that promise?

The Prime Minister: It is an important principle we are introducing: if families spend up to £10,000, they should be able to get £2,000 back. This is a Government for working people that want to help people with the cost of childcare. Not only are we doing that—the Chancellor will set out the timing of the introduction in his Budget—but we are doubling to 30 hours the number of hours people will get if they have three and four-year-olds. The Government are determined to act for working people.

Ms Harman: It does not help working people to make promises and then not meet them.

Let me ask the Prime Minister about another election promise. We know that childcare providers already have to increase their fees to parents who pay for additional hours above the 15 hours they get free. Given that the free entitlement is going up to 30 hours, how can he guarantee that families will genuinely benefit and will not just end up being hit by increased fees elsewhere?

The Prime Minister: First, we will have a review of the fees being paid by the Government to childcare providers, because I want this to be quality childcare. Secondly, there is the increase from 15 to 30 hours, which will be of real benefit to working families. Thirdly, we have this new tax relief coming in, so if someone spends up to £10,000, they will get £2,000 back. That means that families under this Government will have far greater choice and resources on childcare. The right hon. and learned Lady said the other day that a

“greater number of people…feel relieved that we are not in government.”

I suspect that those parents will feel the same way.

Ms Harman: He just cannot help but gloat, can he? He can go right ahead and gloat, but why can he not just answer the question about childcare? Perhaps we could have an answer rather than a gloating session to the next question.

I will try again. We know that grandparents often help out. Most parents say they just could not manage without the grandparents, but increasingly those grandparents are not retired but are themselves working. Will the Prime Minister agree to look at how we can help grandparents get flexibility at work by allowing them to share parental leave?

The Prime Minister: I am certainly happy to look at that because the right to request flexible working has been championed by this Government. I am sorry if the right hon. and learned Lady thinks I am gloating. It must be the first time someone has ever been accused of gloating while quoting the Leader of the Opposition. For instance, she said the other day:

“People tend to like a leader who they feel is economically competent”.

I think she has been talking a lot of sense, and I shall be quoting her as often as I possibly can.