Imprisoned mothers should not be separated from their children - PoliticsHome article 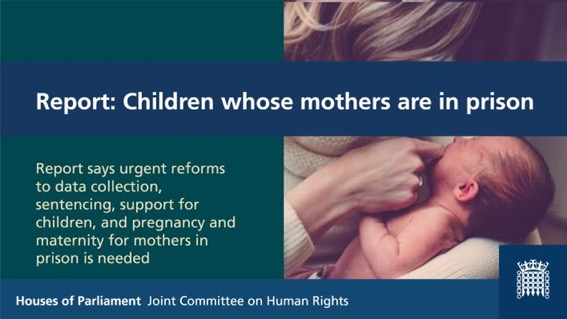 Sending a mother to prison has a serious, detrimental impact on her children.

As our recent Joint Committee on Human Rights report shows, the harmful effects of a mother going to prison begin the moment she is sentenced and are felt throughout her sentence and continue for many years after she is released.

We heard from one mother who told us no arrangements were in place to collect her children from school on the day of the sentence being handed down. We heard of the trauma caused by prison visits, where children have not been allowed to sit on their mother’s knee, and of working kinship carers unable to afford to make prison visits due to the cost of travel.

Research shows that children who experience a parent going to prison as a child are more likely than their peers to have future problems.

These include an increased likelihood of criminal offending, mental health problems, drug and alcohol addiction and dying before the age of 65. They are likely to earn less than their counterparts as adults and stop education at a younger age than is the norm.

Those who give birth in prison, or who are mothers of new-borns when sentenced, experience particular difficulties. In some cases, new mothers have had no access to necessities such as breast pads, or even adequate nutrition. We heard of mothers and their new-born babies being separated whilst applications for places in a Mother and Baby Unit were made and processed - even when there was actually a place available.

We welcome the review of the use of these Units: its ultimate outcome must include an assurance that mothers are not separated from their babies simply because they have been imprisoned.

The Right to Family Life, set out in article 8 of the European Convention on Human Rights, states that “Everyone has a right to respect for his private and family life, his home and his correspondence”. It is this right that is violated when a child loses their mother to imprisonment.

There is a complete lack of reliable data on the number of mothers in prison, the number of children whose mothers are in prison and the number of women who are pregnant and give birth in prison. Without proper data collection it is impossible to fully understand the scale and nature of the problem or to properly address it - the Ministry of Justice must prioritise the mandatory collection and publication of this information.

Judges can only fulfil their obligation to consider the rights of the children of offenders when sentencing if they know that a child exists. There is no guarantee they will have that information, let alone consider the likely consequences of separation of a child from his or her primary carer. The welfare of the child must be at the forefront of the judge’s mind in sentencing a mother or primary carer.

We recommended a change in statute law to require the judge to consider the interests of the child when sentencing.

Our report found that where there are kinship carers willing to step in to care for children who have lost their mother to prison they should be entitled to financial and practical support. Mothers should be placed in facilities close to their homes, and there should also be financial support available for the cost of bringing children to visit their mother in prison. The Department for Education must revise their framework for safeguarding and promoting the welfare of children.

Much greater attention must be paid to the needs of children and their families when a mother is sent to prison.

View the article as it originally appeared on the PoliticsHome site here.