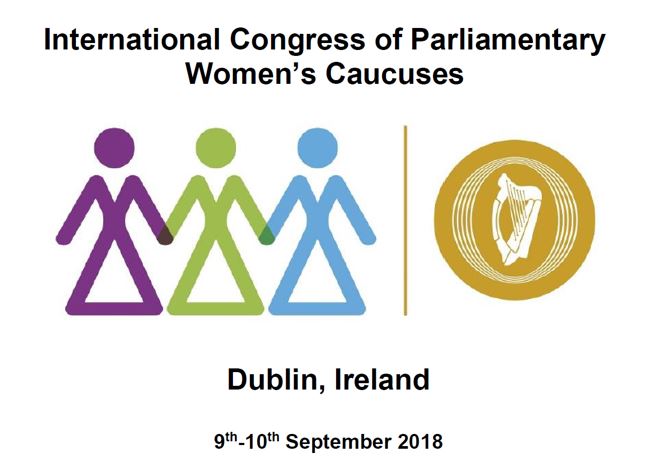 Thank you for inviting me to this exciting conference. In my 35 years of being an MP I’ve been to thousands of conferences but this is unique - to be here together with women MPs from different parts of the world. It’s going to be fascinating to see what emerges as our common agenda and discuss how we can work together to make further progress. So I warmly congratulate Catherine Martin and her team on this initiative. And it’s hugely to the credit of your Taoiseach Leo Varadkar that he recognises the significance of this and is here today.

Just a few points for us to bear in mind:

* We should recognize how far we’ve come in such a short time. As women we are only recent arrivals in politics. We are pioneers. When I was growing up - I was born in 1950 - the idea was that summit of a girls ambition was to be a get a good husband. And after that to be a good wife serving him. My mother, qualified as a barrister - which was very unusual in those days - but after she married my father she gave up. Her wig and gown was in our dressing up box. The man was the head of the household and his word held sway. Men made decisions and women abided by them. That was very much the case outside the home too. Men made history and women made the tea. The rise of the women’s movement challenged those attitudes successfully. Now there is a general expectation that men and women should be on equal terms. In all walks of life. Now there are women MPs in nearly every country in the world. And our numbers are increasing steadily. When I was first an MP in 1982 I was in a parliament which was 97% men only 3% women. Now we are up to 32%. Still a minority, but now a critical mass.

We should be gratified by our progress but never grateful. No one handed it to us. We fought hard for it. All we’re demanding is the rights that we are entitled to. All we are asking for is equality and we don’t have equality yet. We are in parliaments but women in our countries are still not on an equal footing. We’ve won the arguments. Now we need to change the reality. Equality is a human right. Necessary for the economy and for equal societies are ease with themselves. Equality is the future.

*Our case for women in parliament is the case for democracy and for better decision-making. It is essential for the democratic legitimacy of our Parliaments that they are representative - that voters can see that in their parliaments, making the decisions that affect their lives are people like themselves, who understand them. Parliaments are just not representative if there are no, or hardly any women there. When I was first elected, and our parliament was only 3% women it was simply unrepresentative of the 50% of the population is women. Women’s voices were not heard. So, no-one is doing us a favour “letting us in” to parliament. We are a democratic imperative. Male dominated parliaments can’t be defended on grounds of merit. And it’s not about merit. Parliaments with no, or hardly any, women are not meritocracies, they are discriminatory. Unless you believe that men are just so much better than women - which of course we don’t. And a balanced parliament with a diverse team of MPs is better for decision-making. Homogenous teams are blinkered by group-think and are blind to so much in a changing world.

*Though we’ve fought our way in to parliaments we are as yet, as relative newcomers and not on equal terms with the men in parliament. It is not enough just to be allowed in the building. We must ensure that we share power on equal terms. That means equal numbers in senior positions in government and in opposition. And it means women in those positions being as powerful as our male counterparts. When we were in government in 2010, I was in the minister for women and equality but my bill, the Equality Act, was not passed till the very last day we were in office. It was our very last Bill and nearly didn’t get through despite the fact that I was not only in the Cabinet but was deputy leader of my party. And we need women in leadership. My party, Labour, in 100 years has never had a woman leader. We must next time. Don’t get me wrong I’m encouraging all the brilliant men in our party to press on with their ambition - and aspire to be deputy.

And to reflect the reality that women are now in parliaments we need to change the way our parliaments work - so, for example, we’re pressing for proxy voting for a woman MP who’s just had a baby, and for a new MP dad too. I’m keen to hear how all of your parliaments accommodate women who’ve had new babies and men who want to play their part in their families. I know this is something that the Irish Parliamentary Women’s Caucus is exploring.

*It’s our duty as women MPs to speak up for and make change for women. If we leave it to men, it won’t happen. When I was first in Parliament the political agenda was all “money supply motorways and mines”. We handful of women were urged not to “bang on” about women’s issues or we’d be seen to be narrow, not part of the mainstream, not serious politicians. But we women MPs and in the Women’s Movement more widely, insisted that there should be a change in what is seen as the political agenda - that it should include maternity leave, and tackling domestic violence. And childcare which Colette Kelleher played a leading part in when she was in the UK. Should be part pf the mainstream agenda. Together we insisted on changing the traditional political priorities. Our latest push includes equal pay - we’ve introduced a law to require organisations employing more than 250 people to publish their pay gap and that has exposed the scale of inequality. In the UK everyone swears support for equal pay and denies that they are discriminating. But the figures published for the first time this April show that 8 out of 10 employers pay men more than women - in every sector - even sectors such as retail which wouldn’t exist without women’s work. Why should women on the check out at Tesco put up with £8 per hour when the men in the store room get £11.50. How can people expect unions to be the champion for equal pay for their women when our biggest union, Unite for example pays their men employees 30% more than their women. And the teachers union, NASUWT, pays their men 40% more than their women. And it’s nothing less than an insult to the women at Facebook UK that the men there get bonuses which are 60% higher than the women. Now it’s out in the open and we will be demanding progress year on year.

*We must work in solidarity as women. You can’t do it on our own. That means solidarity between women in parliament and women outside. (I would never have survived in the early days - struggling with 3 young children in a male-dominated parliament - without the support of the women’s movement outside parliament). Our solidarity with movements such as #MeToo is essential. And it means solidarity and working together between women within our parties in parliament - and getting more in because numbers matter. It’s good to see that you now have 22% women in the Dail - but we all still have a way to go. (That’s why we did all women shortlists. You have to use whatever organisational methods are going to really deliver.) And solidarity means working with women across parties - where we can - to make advances for women in our countries - as you did in the recent abortion referendum with such spectacular success. Deep party loyalties make that a bit of a challenge to us in UK - and has been difficult because the first feminists in parliament were all Labour and were opposed by the conservatives. But that is changing with the arrival of the new younger women who’ve arrived on the Conservative side and is hugely effective where it does happen - like through the work of the Select Committee on Equality, like our work on domestic violence. And our cross-party working for proxy voting for MPs on Babyleave, and Stella Creasy who you're hearing from later today working effectively cross party on abortion rights for women in Northern Ireland.

*We must win the support of and work with men. That is easier now with the new generation of men who have very different attitudes from their fathers’ generation. They see women as equal and recognise rights of their wife to succeed in their work, recognise the need to share the upbringing of their own children. Sons of the Women’s movement. But as women we must still set the agenda and not allow men to lead on women’s issues. Remember the women’s movement saying “Women must be the engine of our own liberation”.

*We need to work internationally. We’re all on the same path. We’re all pioneers. We all are seizing the same opportunities and facing the same problems. We’re all struggling to combine work and family, we’re all facing the backlash. We support our sisters in other countries in their struggles and draw support by networking/sharing ideas - which is what this conference is such a great example of.

*We must make “unreasonable demands” - “today’s unreasonable demands are tomorrow’s conventional wisdom”. If something’s right in principle then we must demand it. No asking politely. Not just persuading but insisting. And achieving them by force of numbers. We must guard against self-censorship. We’re not asking for favours. We’re demanding the rights that should always have been ours. And we must defend the progress that we’ve made. In the UK we’ve seen the network of children’s centres which are so vital for working mothers, being cut back. There are many countries in the world where women’s rights are being pushed back. We can never be complacent.

*Don’t expect to be popular - a woman in public life is still counterintuitive. But we must call out abuse and threats of violence. I didn’t when I was first an MP and was subjected to death threats. As a young woman with babies I feared my constituents would think I was not able to fight for them if I was weak and too preoccupied with my own problems. But I now think that was wrong. It’s not about proving we’re tough. Attacks on women MPs are not just misogyny, they are anti-democratic. Our wonderful colleague Jo Cox was murdered for doing her job as MP. We’re elected by our voters and they expect us, and we are entitled, to get on with our job without fear on hindrance.

So, I look forward to hearing your Taoiseach - it’s so encouraging that this agenda has support at the highest level of government. And I look forward hugely to the discussion. But above all I send you solidarity and wish you support in your struggles. We are looking forward to our own conference of women MPs from around the world in November in the House of Commons to which some of you will be coming and we can continue the conversation. 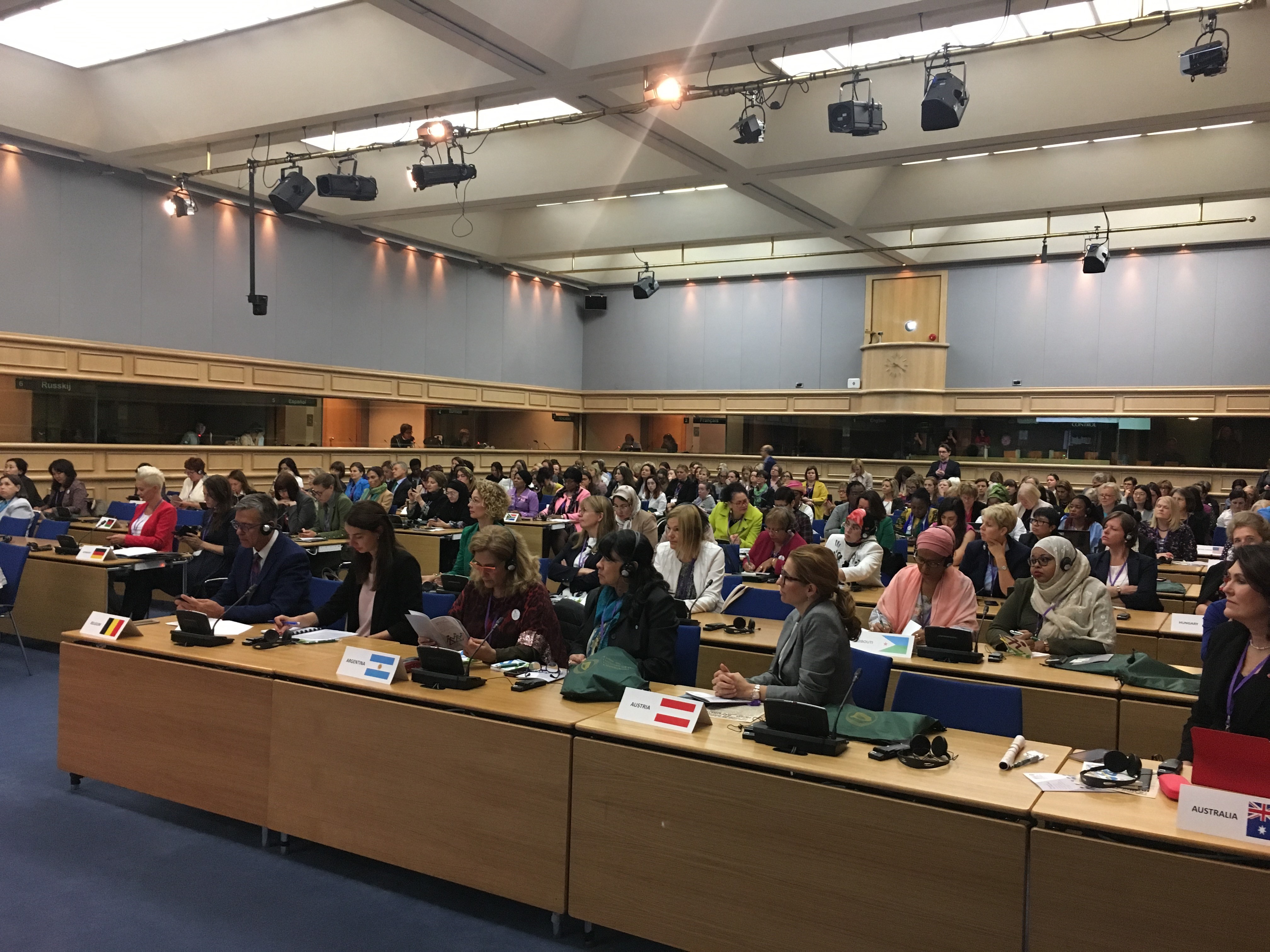