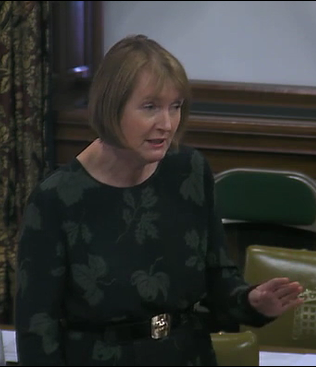 This afternoon, in a debate on barriers for women in running for parliament, I raised the issue of ‘Baby Leave’ for MPs.

You can find my speech below:

“I warmly congratulate the hon. Member for Eastleigh (Mims Davies) on securing the debate and on everything she said. She told us that she dithered about filling in her application form to be the Member of Parliament for Eastleigh but, my goodness me, since she arrived here she has not dithered at all. I pay tribute to her. It is baffling to me when I hear Conservative women Members of Parliament making a speech that I myself might have made, but I guess that shows that daughters of the women’s movement are in all parts of the House. I warmly appreciate what the hon. Lady said.

The Minister for Women is now a woman; the first Minister for Women was a man, so that is progress. We have a Select Committee, a Women and Equalities Committee, which is ably chaired and pushing things forward. My goodness me, we even have women MPs from Scotland, and that is incredibly important. There used to be only two women MPs in the whole of the north, and I remember complaining to my Labour colleagues, who said, “Women in the north do not want to be MPs”—but oh yes, they did. One of my colleagues even said, “There are no women in the north,” which was obviously not true.

In particular, I support what the hon. Member for Eastleigh said about having baby leave for Members of Parliament; we are not doing women any favours by letting them be in the House of Commons. It is a democratic imperative that our Parliament is representative, which means of women as well as men, and it is a fact of life that women have babies. As she said, 17 babies have been born to women MPs since 2010, and more will be on the way. We set the rules for maternity and paternity leave outside this place, but we have none for ourselves. Although Whips are much more civilised than they used to be—not entirely civilised, but more civilised—what woman or man should be beholden or grateful to the Whip for letting them have time off? We need it to be on the table, transparent and as of right.

Also, the vote of such MPs should be recorded, which is why we should have proxy votes. The constituency is entitled to have its Member voting, even one who has just had a baby. That is why I suggest a system of proxy votes, so that when we go past our wonderful Clerks with their iPad, we give not only our own name but the name of someone on whose behalf we are casting a proxy vote. The constituency will then be represented.

I agree with what the hon. Lady said about IPSA. It is chaired by someone who formerly chaired the Maternity Alliance, and I hope that IPSA will look at maternity cover, so that we can have six months’ leave, as people do in the civil service. That should apply as much to men as women. Nowadays men aspire to be more involved with their children than they did in the past.

I will finish with an anecdote. I remember sitting in a Committee when one of my colleagues jumped up and said, “On a point of order, Mr Chair.” He looked at his pager and said, “My wife’s just had a baby.” Everybody said, “Hear, hear!” and I thought, “Why on earth are you here?” That is not a good example of fatherhood or motherhood. We expect fathers to be involved with their children; women need to be with their babies; babies need to be with their mothers for the early months; and the constituency needs to be represented, but we can square that circle, not least because everyone here supports it and because we have a Speaker who, despite having arrived in the House of Commons as a Tory and still being a man, is an honorary sister on these issues. I hope that this broad-ranging debate will bring about progress, and I thank the hon. Member for Eastleigh for securing it.

I ask the Leader of the House to look at yesterday’s Westminster Hall debate on the representation of women. It was led by a truly excellent speech from the hon. Member for Eastleigh (Mims Davies), which elicited a wide consensus across the parties. There are more women in the House than ever before, and that is not just welcome; it is a democratic imperative. There are more babies being born to women MPs, which is a fact of life. Since 2010, 17 babies have been born to women Members of this House, and there is no maternity leave or paternity leave.

At the European Union (Withdrawal) Bill debate on Monday, the only way for my hon. Friend the Member for Liverpool, Wavertree (Luciana Berger) to record her vote was to bring her lovely new baby—just a few weeks old—to the House, and my hon. Friend the Member for Bury North (James Frith) had to leave his baby, who is just a few hours old. Will the Leader of the House join me in thanking Mr Speaker for setting up a reference group to consider the matter and in supporting his work? We can square the circle to ensure that we can be good parents and excellent MPs and that constituents can be properly represented, but we need change. Mr Speaker, although you arrived in this House as a man and as a Tory, since you have been in the Chair you have really proven yourself to be nothing less than an honorary sister.”

You can read the full transcript of the debate here

The Speaker has encouraged the Commons Reference Group on Representation and Inclusion to consider my proposals and will bring forward a motion to the House soon. Such necessary reforms will go a long way to making Parliament more representative and inclusive.