Press Release: More than 25,000 London children miss out on their first choice of school: Harriet Harman MP calls for action.

“Almost a third of parents in London did not get their first choice of secondary school for their child this year. This means 25,931 children across London missed out on their first-choice of school.  London, and in particular Inner London, is right down the bottom of the league table for parental choice (4).

“David Cameron said parental choice was one of his priorities but the Tories’ education reforms are failing to deliver this in London, and are letting children and parents down." said Ms Harman.  "It’s one of the biggest concerns for parents in my constituency of Camberwell and Peckham that they don't have confidence in their local school and either their children have to travel miles to go to a school they do want, or end up in a school which they didn't choose."

Ms Harman is today calling for action from the House of Commons Education Committee, The Secretary of State for Education and the London Mayor. She has

- written to the chair of the House of Commons Education Committee Chair Neil Carmichael MP to ask him to conduct an inquiry into the issue of parents not getting their first choice of secondary schools.

- written to the Secretary of State for Education Nicky Morgan MP repeating her demand that Ofsted’s terms of reference should be widened to include the issue of parental preference in their inspections.

And Ms Harman is calling on the candidates for the new Mayor of London who'll be elected next May to commit to making this issue a top priority.  "This is a London-wide problem which Boris Johnson, the current Mayor, has shown no interest in and on which he has taken no action."

Ms Harman has published a report on parental choice in her constituency showing the oversubscribed and undersubscribed schools. (1)   For Harris Academy in Peckham, there are only 41 first choice applications for 180 places.  “It's no good Ofsted and the school saying what a great job they do.  They must understand and address the reasons so many parents don't want to send their children there."

1.         Harriet Harman MP today publishes her annual school choice report ‘Are parents in Camberwell & Peckham getting the choice of secondary school they want for their child?’ A copy of the report can be found here

Rank out of 151 local authorities: 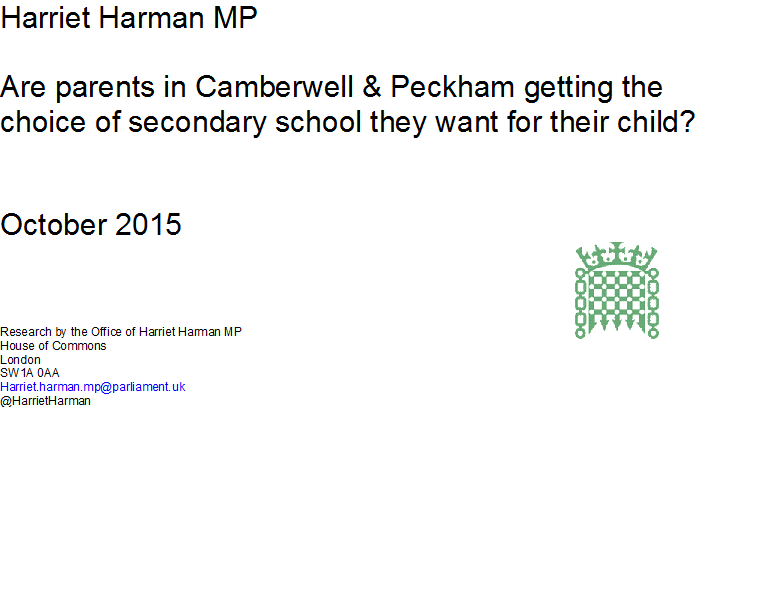