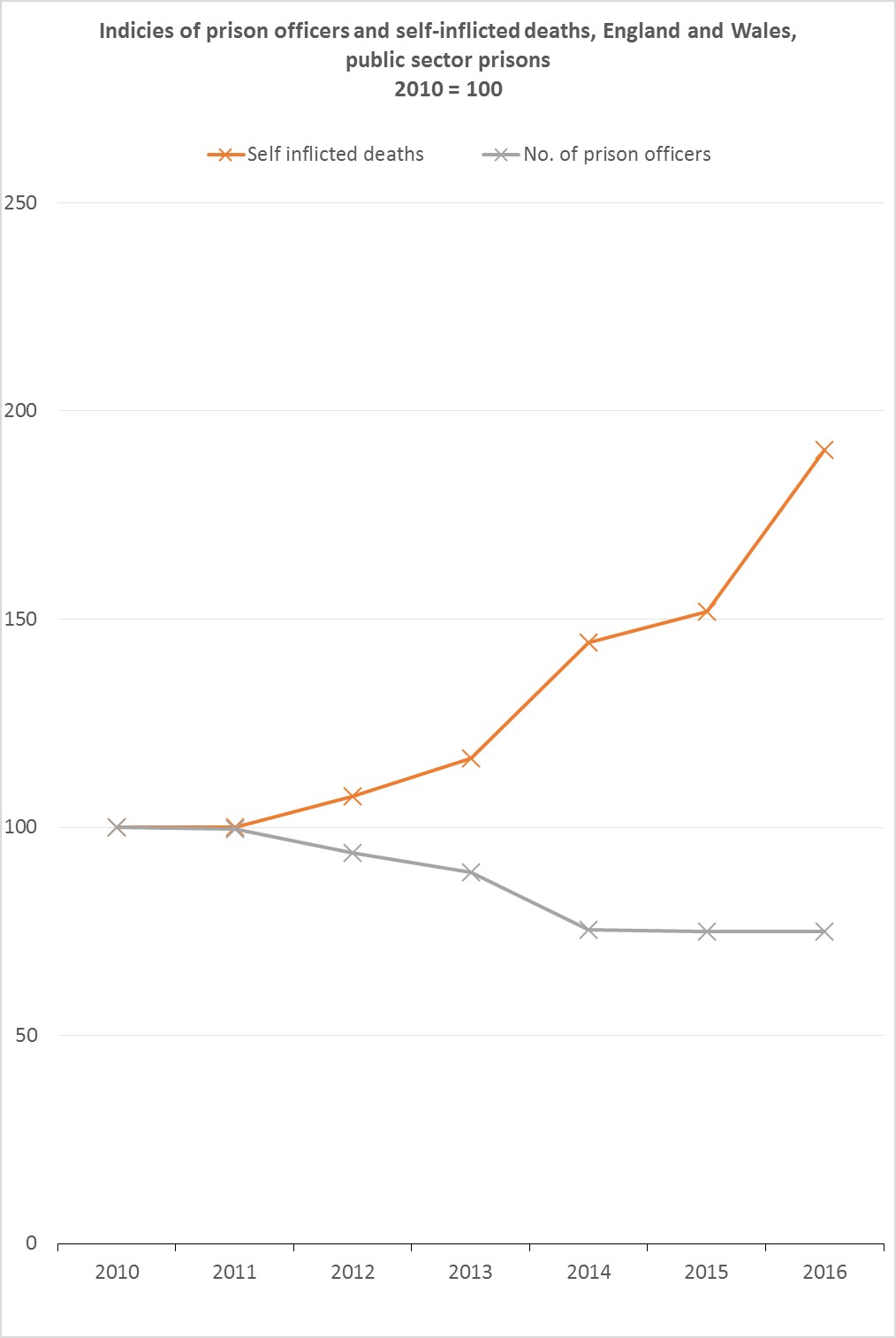 As prison officers are cut, prison suicides soar. Today I spoke in the Second Reading of the Prison and Courts Bill in the House of Commons to call for a new law that sets out a maximum ratio of prisoners to officers. This is the full text of my speech:

This Bill gives the House, the Secretary of State and her Prisons Minister the chance to do something which should have been done a long time ago - but which is now urgent.  And that is to end the death toll of suicidal mentally ill people who take their own lives in our prisons.

When the state takes someone into custody we have a duty to keep them safe.  Their life becomes our responsibility.  Yet prisons are not a place of safety.  Last year 12 women and 107 men took their own lives while in prisons, in the custody of the state.

The Bill this Government has brought forward affords us the important opportunity to change the law to prevent these tragic deaths and we must seize that opportunity because the problem is urgent and it is growing.

We all know that the issue of prison reform is not one which brings people out onto the streets, or which tops the agenda at election time. And unfortunately I wish I could agree with the honourable member who has just spoken, much of which I did agree with him on, but actually I think that when it does rise up the agenda it is usually not in the cause of liberalising prison regimes but because of demands to make them more draconian.  That makes the job of Secretary of State and the Prisons Minister - in any government - particularly challenging. Which is why, where it's possible, a cross-party approach to this is important and why the Committee which I have the honour to chair, the Joint Committee on Human Rights, which is both cross-party and comprised of members from both this House and the House of Lords, is conducting an inquiry into suicides in prison.

Every single one of these deaths is an absolute tragedy for each individual and their family.

As Mark, the father of Dean who took his own life told our Committee earlier this month, "we don't have capital punishment in this country. Yet when Dean was sent to Chelmsford Prison he was sentenced to death."

And so too it was for Diane Waplington, whose mother and aunt came to Parliament to give evidence to our Committee.  Her suffering had been so intense that to harm herself she set fire to a mattress while in a secure hospital and the response was to send her to Peterborough prison, where she took her own life.

The tragedy of suicide in prison is not new but, as the Government acknowledges, it is urgent.  Last year the number of self-inflicted deaths rose by 32%.

It's not that this is a new problem, or even one where no-one knows what to do.  There have, over the years, been numerous weighty reports which Members of this House, members of the House of Lords, judges and many others have contributed to which have analysed the problems and mapped out the solutions.

Successive governments have welcomed their proposals, changed policy, issued new guidelines - but nothing changes.  Except the death toll - which rises.

It's not that we don't know what needs to be done - it’s just that we haven't done it.

We must recognise the reality here.  There is no point in having more reviews or new policies or new guidance.

What is needed is to make sure the changes we all know are needed actually happen in practice.  And for that to happen what is needed is a legal framework which will ensure that the necessary changes take place because they are required by statute.

Reports and guidance and White Papers are not enforceable and are not enforced.  Law is.  This Bill is the opportunity to put into law the changes, highlighted by the countless, weighty reviews and inquiries.

The Joint Committee on Human Rights' inquiry is still ongoing.  But because this Bill is before the House now, I want to ask the Prisons Minister to consider including a number of New Clauses in this Bill in order to put into law the following:

When there are not enough staff - sometimes just two prison officers on a wing of 150 prisoners - prisoners remain locked in their cell, medical appointments and educational sessions are missed, they don't get to see the nurse for their medication, calls for help go unanswered.  Prison officers don't have the time to unlock them for exercise, let alone sit down and get to know the prisoners and, in the vacuum, the worst of the prisoners take charge.  Staff become demoralised and defensive, prisoners angry and frightened - the most vulnerable at risk.

This is in the White Paper, but I say to the Minister, that unless it's in the Bill, it just won’t happen - it'll remain nothing more than a good intention.

The family of Dean Saunders told us that far from being given the chance to contribute to the reviews of the measures to keep him safe, it wasn't until the inquest that they actually found out that in the two and a half weeks he'd been in prison there had been 8 reviews - conducted by staff who didn't know Dean or anything about him.

If the Minister says these 6 things are too detailed and specific for law, I would say look at the law that applies to education, look at the law that applies to health.  You'll find there legal provision for maximum staff/child ratios, legal time limits for referrals for health treatment.  If it's good enough for the education and the health service, why not for our prisons.

If the Minister says that these issues don't need to be in law, or they can be or already are in guidance, I say we've done that over and over again and it hasn't worked.  Now, it’s time it must be put into law.

If the Minister says that these issues are more suitable for Regulations than being on the face of the Bill - I'm sure I'd have no objection to that.  Whether they are in primary or secondary legislation, is not what matters. What matters is that they should be put into law.

And I know exactly what his civil servants will say when he goes back to his department. They'll say it is unnecessary or they'll say it can't be done.  But I would ask him most sincerely to reflect on this point.  Being a Prison Minister is a great responsibility and a great privilege.  And I know he's committed to his ministerial role so I hope that he'll resist the voices which will urge him to do no more than preside over this wretched status quo.  And I ask the House to help the Minister do what needs to be done by putting these proposed New Clauses into the Bill.

Nothing will bring back Dean Saunders and Diane Waplington, whose heartbroken families gave evidence to our Committee, or any of the other 12 women and 107 men who killed themselves in our prisons last year alone.

But we in this House, and the Minister, have a chance to make this Bill the turning point where we stop talking about the problems which are costing lives and take action. As Prison Minister, he, more than many other ministers, has an opportunity to make a difference and to save lives.  I hope he will seize that chance.  And we must make sure that he does.