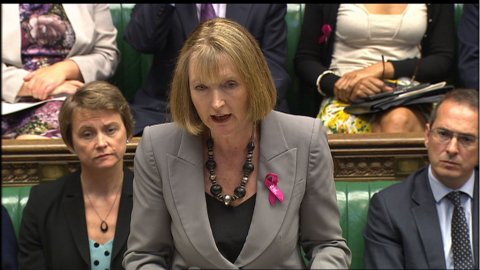 Today I stood in for Ed Miliband at Prime Minster's Questions following the joint statement announcing that he, David Cameron and Nick Clegg would travel to Scotland to listen and talk to voters ahead of the referendum vote on the 18th September.

Please see the transcript below:

I thank the right hon. Gentleman for his words about our good friend and colleague Jim Dobbin, and add my tribute to him after his sudden and tragic death at the weekend. He was, as has been said, a thoroughly decent man who always stuck to his principles. At a time when it is fashionable to say that politicians are in it for themselves and out of touch, he was the absolute opposite of that. Our deepest sympathies are with Pat and their children, and we will miss him greatly.

“Historic” is a much overused word in politics, but does the right hon. Gentleman agree that in just eight days’ time the people of Scotland will make a truly historic decision? This is their vote, but I want the message from the Labour Benches to be heard loud and clear: we want Scotland to stay.

Mr Hague: I agree with the right hon. and learned Lady. That is a clear message from the Opposition and, despite our differing political perspectives, from the Government parties as well. I hope, therefore, that the message the people of Scotland will hear from the House, where Scottish parliamentarians have made an immense contribution for generations, is that we want to stay together and cannot imagine life on these isles without them. She is a London MP and speaks for millions in what she just said; I am a Yorkshire MP who has served as Secretary of State for Wales, and we are all proud to be British, combining those identities. There is no doubt we would all be diminished if Scotland was separated from the people of the rest of the UK.

Ms Harman: The roots of our party run deep in Scotland. We delivered devolution and the Scottish Parliament, but we need to go further. Will the right hon. Gentleman confirm that there will be further devolution and that a Scotland Bill setting out new powers will be published in January?

Mr Hague: As the right hon. and learned Lady knows, the three main party leaders have come together to agree to develop a programme for change. The right hon. Member for Kirkcaldy and Cowdenbeath (Mr Brown) has set out a process for how that change could be delivered to a tight timetable, and all three main parties have endorsed that timetable. It means immediate action the day after the referendum to start the legislative process; it means a Command Paper, including proposals, at the end of October, with a full draft Scotland Bill published by the end of January; and it means the introduction of a Bill after the general election, regardless of who forms the Government. That is a clear timetable and it shows that Scots can have change without irreversible separation and without such risks to jobs and their future.

Ms Harman: I thank the right hon. Gentleman for the clarity of that answer. As we set about devolving further powers to Scotland, does he agree that the time has also come to devolve further power to Wales and, crucially, to the great cities and regions of England too?

Mr Hague: As we all know, the decision next week is a matter for the people of Scotland, but the implications will be felt by all the people of the United Kingdom. We are already steadily devolving increased powers to parts of England and Wales. Under this Government, Wales has received more primary law-making powers and we are moving towards devolving tax and borrowing powers. We want to see devolution in Northern Ireland succeed. In England, the Localism Act 2011 devolved power over business rates to local authorities, and city deals have given local areas more of a say over their governance. One of the greatest strengths of the United Kingdom is that it is not a rigid union; it is a living, flexible union.

Ms Harman: For Labour Members, a fundamental principle of our politics is solidarity. We want the UK to stick together in the cause of social justice. Does the right hon. Gentleman agree that it is wrong to set the different countries of the UK against each other, whether on workers’ rights or corporation tax?

Mr Hague: The right hon. and learned Lady makes a powerful point about solidarity in the UK. For 300 years, we and our predecessors have sat in the House with Scottish parliamentarians and their predecessors. Since the 18th century, they have sat together to implement a great range of progressive causes, from the abolition of the slave trade to our pursuit of human rights and sound development across the world today. We have often led the way at times of world crisis and been an inspiration to democratic peoples elsewhere. The next 300 years could easily be as turbulent and dangerous as the last 300 years, so to tear apart a union so proven, so precious and so valuable would be a tragic mistake for all our peoples.

Ms Harman: People in Scotland can now be certain that with a no vote, there would be change and more powers for Scotland. Does the right hon. Gentleman agree that posed against that certainty is the uncertainty that a yes vote would bring on so many issues, including jobs, pensions, mortgages and the currency?

Mr Hague: The uncertainty it would bring is impossible to list in answer to one question, but a letter signed last week by more than 120 job creators from across a range of Scottish business concluded that the business case for independence had not been made. It said:

“Uncertainty surrounds a number of vital issues including currency, regulation, tax, pensions, EU membership and support for our exports around the world; and uncertainty is bad for business.”

The Governor of the Bank of England said yesterday that sovereignty and a currency union were “incompatible”, and he is right—many of us have pointed that out for many years in relation to another currency. Be certain of this: this is not an opinion poll where you can change your mind the next day; it is not an election where you can reverse the result four or five years later; it is a permanent decision that will affect generations. Therefore, the votes cast next Thursday will probably be the most important votes that can be cast in any country at any time, and the voters must weigh that vote heavily.

Ms Harman: While jobs, pensions and taxes are important, next week’s decision, as the right hon. Gentleman rightly says, is about much, much more than that. For sure, there must be change. We must have that, and we will, but not by tearing this country apart. We must stay as family, not become foreigners to each other.

Mr Hague: The right hon. and learned Lady puts it extremely well. We all want the best for Scotland, just as we all want the best for our own constituents, from all parts of the UK, in this House. The people of England, Wales and Northern Ireland believe that Scotland is better off in the UK and the UK is better off with Scotland in it. This referendum is the most important choice the people of Scotland will ever make: a choice between the opportunity and security of staying in the UK, and leaving for ever, without the pound and without the UK’s influence in the world. With Scotland as part of the UK, we have the best possible situation and a great future together in the United Kingdom.