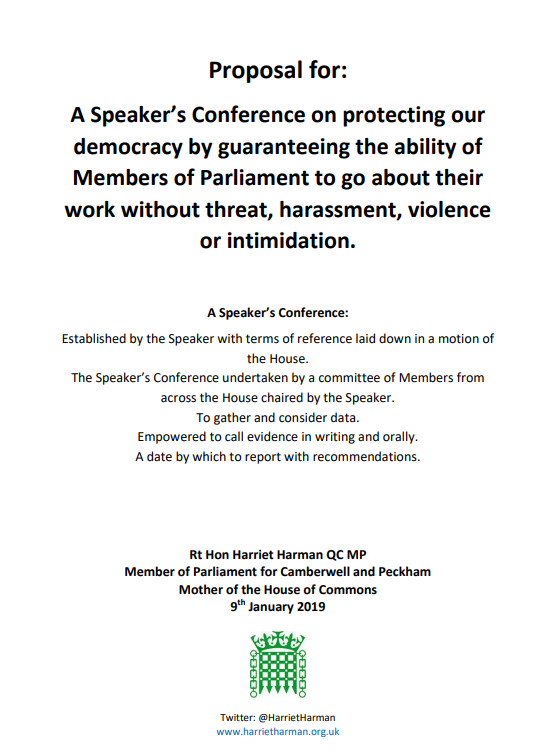 As Mother of the House of Commons I am working jointly with the Father of the House, Ken Clarke, to propose a Speaker's Conference on protecting our democracy by guaranteeing the ability of Members of Parliament to go about their work without threat, harassment, violence or intimidation.

The fundamental principle of democracy is that MPs are elected by the voters and once elected no-one must stop them carrying out their duties.  They must be able to get on with their job.  Yet, now, on a more or less daily basis, MPs are threatened with physical violence. Where MPs are threatened just because they are an MP that is a "contempt of parliament" and an undermining of our democracy and demands action.

The advent of social media means that the whereabouts of MPs whether at home or at work, are very widely known.  Social media is important for MPs to communicate directly with their constituents and account for what they are doing on a regular basis.  But it is also used by people who anonymously threaten MPs and by those who whip up hostility and violence towards MPs.

Now, more MPs are women, living away from their families on their own during the weeks when parliament is sitting. MPs are high profile and when there’s an atmosphere of hostility to politics and politicians they are vulnerable.

BBC 5 Live has conducted a survey of women MPs asking about our security. It showed:

This is a problem for men MPs as well as women.  While MPs are away from their home during the week their families, living at an address which is well-known locally and easily found on the internet, can feel vulnerable.  This applies to elderly relatives who might be living with them as well as spouses and children.  A police officer stood by while a member of the public shouted out at the young children of Jacob Rees-Mogg.  If their parent had been a member of the public rather than an MP it’s surely the case that the officer would have stepped in and asked the ranting member of the public to “move along now”.

Women MPs, particularly younger women and most particularly ethnic minority MPs, are subjected to the greatest number of threats. A study by Amnesty International in 2017 found Diane Abbott received almost half of all abusive tweets ahead of the June 2017 General Election and black women politicians are almost twice as likely as their white peers to be abused on Twitter.

There has always been a level of threat against MPs but we don’t know the scale of the problem because MPs are reluctant to report and many threats and offences go unreported.

We also don’t know the full extent to which MPs are altering the way they work and travel because of these threats. Their priority is to get on with their job, not to talk about their own personal safety.

Parliament has taken many steps to protect MPs both before and in particular after the murder of Jo Cox as she held her constituency advice surgery.  MPs can apply for funding from IPSA for extra security in their own homes and constituency offices.

MPs who are threatened all deal with it differently.  Some ignore it hoping it will go away.  Some call the police - and depending on which police area they are in get widely differing responses.  Some take out injunctions against the threatening individual - hoping that so doing will inflame them less than a police intervention or worried for the threatener’s mental health if the police are involved.

When an MP is threatened by a member of the public the response of the police and the CPS varies in different areas.  On some occasions the Criminal Justice Agencies react on the basis that it is their job to protect the MP.  Sometimes their response is based on the sense that they regard it as their job to protect the rights of the public, to demonstrate, to have free speech in relation to their MP, to challenge their public representative.

Over the past years the concern has mounted but there’s been no comprehensive consideration of the issues at stake and the measures needed to address them.

Unless we respond to threats and abuse we are colluding with the notion that we deserve to be denigrated and abused. We cannot just denounce every ugly incident but take no action.

The responsibility for ensuring that MPs are able to get on with their work, vote without looking over their shoulder and freely engage with their constituents and the wider public lies not with them as individuals or their party or the Government.  It lies with Parliament.  Parliament must step forward to address them.