Tina and Joan’s family will miss her most of all – and grieve for her loss.  But I’m grateful to have the opportunity to say how much Joan meant to me and how much I admired and trusted her.

I admired her toughness.  She was the youngest of 10 children and a strong and determined woman.  She never made a thing about it but she worked hard all her life.  With her husband in the veg business – and bringing up Tina - caring for her husband during his long period of ill health.  That would have been more than enough for most women.

But not for Joan – she still had the energy and drive to play a leading role in the local area – for the tenants in her neighbourhood, for the children in the local area, for the Labour Party.  She will be greatly missed at Michael Faraday school.  On a visit to the school with Joan the children all flocked around her.

I admired her indomitable spirit and her fortitude.  Life was not handed on a plate to Joan but she faced up to life with enthusiasm and met any challenges with her wry sense of humour.   She was never a complainer because she was always thinking of others – who she could help – rather than herself

But though she was tough, she was never hard.  She was very kind hearted.

She was sharp as a razor – intelligent and insightful – and though she could tell when people were getting it wrong she preferred to see the good in people rather than criticise. She believed in people and helped them believe in themselves.  That’s why she was so much the essence of the Labour Party.

I trusted her because her personal qualities and her life experience gave her great insight and wisdom – I valued her opinion greatly.  And I completely trusted her advice.

If she urged me to do something, I learnt it was better to get on and do it.

If Joan warned me against doing something, I knew it was not worth doing.

Often she’d save her advice for me till after a meeting  - and give it to me privately - when I was dropping her back in the car.  She was a loyalist - so when she had criticisms of anyone, or the Labour government or the council – she made it constructively and privately.

Because Joan was at the heart of many initiatives to improve the Aylesbury Estate  - and the local area - she was able to bring that practical experience to our local Labour Party meetings.

Through thick and thin she supported the Labour Party.  Helping us get into government, supporting our GLA Campaigns – Val Shawcross will miss her – and supporting out Labour councillors.  Peter John and his team will miss her

At the meeting of Faraday Ward Labour Party I went to last week there was a special presence of Joan in the room.  At a time of so much change, Joan was a constant and she will be so missed in her ward.

Though Joan was without doubt a stalwart of many community and Labour party campaigns and meetings and she cared passionately about improving the lives of local people – especially children - no one could ever think Joan was dull.  She loved socialising, having fun and having a good laugh

It was a great occasion last year when she was given the Labour Party’s highest honour – the merit award.  We were all so proud of Joan and delighted that Tina was there to see her receive the award.  Even though she needed a straw for her drink – you can guess what was coming through that straw - Gin.

I shall never have a gin and tonic without thinking of Joan – I shared rather too many with her over the years.

One of the great strengths of our local Labour party is its diversity – young people, older people. People born and brought up in the area and the newly arrived.

But the loss of Joan Amodio leaves a huge gap.  I was proud to know her and privileged to work with her.

She is irreplaceable and we all miss her.  But our hearts go out most of all to her beloved Tina and her family. 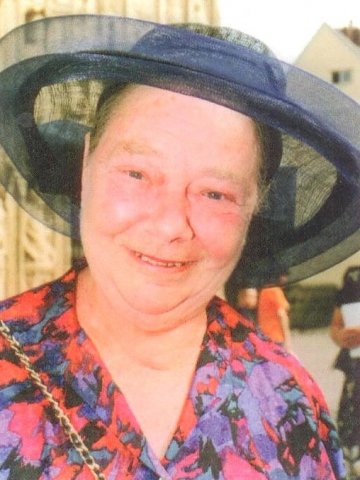