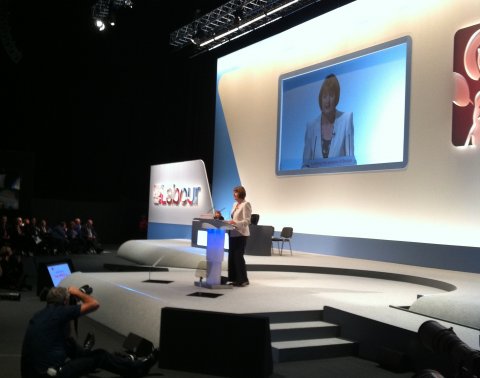 Thank you, Maryan, for coming to our conference. There can be no end to the suffering in Somalia without an end to the conflict.

And thanks to Islamic Relief and all the aid agencies who are doing such heroic work.

No one listening to Maryan and seeing the work of Islamic Relief can be in any doubt about the terrible suffering in the famine.

And no-one should be in any doubt that our aid is alleviating suffering and saving lives.

Everyone in this country who contributed so generously to the Disasters Emergency Committee appeal should be really proud of what the money they have given is doing.

Everyone is entitled to be proud of what our Department for International Development is doing.

And we should also pay tribute, too, to the massive support that comes from the communities of African origin in this country who are working hard here and sending money back home.

It matters to the girls in Afghanistan - who go to school now.

It matters to the villagers in Pakistan whose homes were swept away by the flood - who are getting shelter now.

It matters to the Sierra Leonean women I met in the slums of Freetown - who can get free health care for their children now.

It is harder to make the case for international aid when in this country the government are cutting the police and putting up tuition fees.

We must not make the world's poorest pay the price of a global financial crisis precipitated by the greed and irresponsibility of the world's banking system.

But when people are dying unnecessarily and - we can help - that is what we must do.

Development helps this country too, by growing the market for world trade and reducing the poverty which ferments instability and conflict.

In their election manifesto, the Tories promised to stick to Labour's commitment of aid growing to 0.7% by 2013.

We want them to do that.

But while Andrew Mitchell is - to his credit - fighting to live up to our 0.7% promise, most of the Tories are against it - including his fellow cabinet ministers who're blocking the legislation they promised to put it into law.

We mustn't let aid be just the next Tory broken promise.

That is why - with the Labour Campaign for International Development - we launched the Keep the Promise campaign.

But there are crucial things on development which no Tory government will ever do.

They'll never tackle the unfair trade which sees rich countries get richer and the poor get poorer.

They will never tackle the obscene global speculation on food and land that sees profits soar while the poor go hungry.

They will never tackle climate change - which hits first and hardest at the poorest countries. That's what Ed Miliband did when we were in government. We hear nothing of that now.

The Tories' team of men only development ministers will never be able to lead the way internationally in empowering women and girls in the developing world.

The Tories will never lead internationally. This government is not doing what Tony and Gordon did - making sure this was raised at every summit and that other countries play their part. We're doing our bit, but it can't just be left to us.

Ed Miliband has rightly talked about responsibility. From the top to the bottom. And it's the same with international development.

We, in the developed world, are responsible for doing what we can to save lives

And there is responsibility - too - on global companies not to rip off developing countries.

Africa has huge reserves of oil, gold, iron, diamonds. The biggest companies make billions of profit. They must publish what they get in profits from each country and what they pay in taxes to each country. Global companies all say they are committed to transparency - but they are not doing it.

No-one can accept the situation where we have to give money to poor countries but those countries - which are rich in natural resources - don't get their fair share of the profits from their mines.

The truth is, more is lost to people in poor countries from tax dodging by global companies than is paid in aid.

We need to be able to see global companies acting as a force for good - not undermining development as an engine of exploitation.

The government have said they want this to happen - but they are doing nothing about it. That must change.

Conference, international development is not about charity, it's about rights.

It's not just about philanthropy, it's about justice