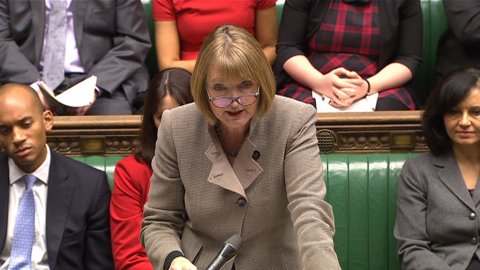 Today I challenged Nick Clegg, Deputy Prime Minister, on the record of this Government. He has supported a Prime Minister whose actions in Government has meant that working people are now £1600 a year worse off thank before the General Election. Nick Clegg and the Liberal Democrats have voted for measures including supporting the trebling of tuition fees, the Bedroom tax and top-down reorganisation of the NHS.

Ms Harriet Harman (Camberwell and Peckham) (Lab): I join the Deputy Prime Minister in conveying our deepest sympathy to the families of the nine people who lost their lives in the tragic accident in Glasgow, and in paying tribute to the brave work of the emergency services and the quite remarkable response of the people of Glasgow.
Will the Deputy Prime Minister tell the House whether, compared with last winter, this winter’s household energy bills will be lower or higher?

The Deputy Prime Minister: They would be higher if we had not taken the action that we have, and I would simply point out to the right hon. and learned Lady that her party’s economically illiterate policy is to impose—[Interruption.] In fact, her energy spokesperson said on television just two days ago, “Well, you can’t” control energy prices. So there we have it. The right hon. and learned Lady does not need me to point out that her policy is a con; her energy spokesman has done it for her.

Ms Harman: The Deputy Prime Minister has not answered the question I asked. The Deputy Prime Minister has ducked and he has dodged and he has not answered the question I have asked. The truth is that household energy bills are not going down; they are going up. As for the measures—the £50 they have talked about—they are not enough to stop bills rising, but can he tell us exactly how much of the £50 will come from the profits of the energy giants?

The Deputy Prime Minister: I know the right hon. and learned Lady’s piece of paper says I did not answer the question, but I did actually answer the question: bills will on average be £50 lower than they otherwise would be. That is pretty simple. We have done that by adjusting the policies, while adhering to our green commitments, where Government policy has an influence on people’s energy bills. Her party’s policy is pure fantasy—total and utter fantasy. We have got £50; she has a fantasy freeze.

Ms Harman: The Deputy Prime Minister says he has answered the question, but he has not. He has not stood at this Dispatch Box and admitted that, as a result of his Government’s policies, energy bills are going up, not down. He has not admitted that.[Interruption.] He can, next time he answers. What he is trying to hide is that not one penny will come from the profits of the energy giants, who could well afford it. They are tiptoeing around the energy giants, allowing them to put up their bills. When it comes to standing up to the rich and powerful, this Government are weak, but when it comes to hitting the most vulnerable in our society, they have no qualms at all. Last week at the Dispatch Box the Prime Minister said that disabled people are exempt from the bedroom tax. That is not true. Will the Deputy Prime Minister apologise and put the record straight?

The Deputy Prime Minister: The right hon. and learned Lady talks about standing up to vested interests, in the week that we discover that the great courage of the Labour leadership to stand up to its trade union paymasters is—[Interruption.] Guess what? It is mañana, mañana, mañana; all too difficult, an absolute—[Interruption.]

Mr Speaker: Order. This House should be the bastion of free speech. Neither the Deputy Prime Minister nor the right hon. and learned Lady must be shouted down and we will keep going with this session for as long as it takes for proper order to be observed.

The Deputy Prime Minister: And, Mr Speaker, if I may say so, it should be the bastion of political parties free of vested interests, and it is high time that the Labour leadership does what it says and stands up to its trade union paymasters. The right hon. and learned Lady should stand up to her bosses first.

Ms Harman: I suggest the Deputy Prime Minister leaves it to us to worry about our party members, especially as so many of them used to be his. Given that for over 90% of people hit by the bedroom tax, there just is not a smaller property for them to move to, what would he have them do?

The Deputy Prime Minister: Under the right hon. and learned Lady’s Government, for 13 years housing benefit to people in the private rented sector was provided only on the basis of the number of rooms needed. We are applying exactly that same rule, which they administered for 13 years, to those in the social rented sector. For the reasons we heard earlier, we have at the same time many, many thousands of families in overcrowded properties and 1.8 million households still on the housing waiting list. As with so many other things, we are sorting out the mess they left behind.

The Deputy Prime Minister: Without the Liberal Democrats there would not be a recovery. [Interruption.]

Mr Speaker: Order. The answer will be heard.

The Deputy Prime Minister: We have our differences on this side of the House, but the one thing that unites us is that we would not have gone on a prawn- cocktail charm offensive sucking up to the banks, which created the problem in the first place. We would not simply say to our children and grandchildren, “You can pay off this generation’s debts.” No one on this side of the House would have broken the British economy in the first place.

Ms Harman: The right hon. Gentleman talks about the recovery: there might be a recovery for the rich, but for everyone else there is a cost of living crisis. He will not stand up to the powerful and he will not stand up for the weak, but when it comes to being a loyal deputy to a Tory Prime Minister he will go to any lengths, break any promises and sell out any principles. The truth is that if people want to freeze energy bills and scrap the bedroom tax, it is not going to be the Tories and it is never going to be the Liberal Democrats—it has got to be Labour.