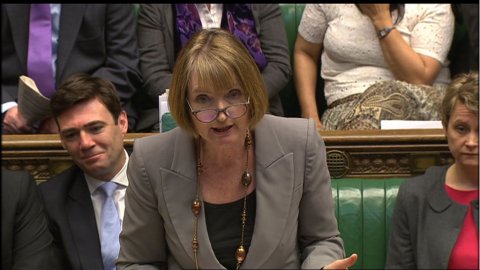 Today I challenged Nick Clegg on tuition fees following research that shows that the trebling of tuition fees is on course to cost the taxpayer more than the system it replaced. The full exchange is below.

Will the Deputy Prime Minister confirm that new figures show that the Government’s trebling of tuition fees is on course to end up costing the taxpayer more than the system it replaced?

The Deputy Prime Minister’s bluster will not have disguised the fact that he has not answered the question. He said he had to back the Tories on tuition fees because it was too expensive not to. The truth is, as even the former departmental special adviser has now admitted, the Government “got its maths wrong”. There are now rumours that, to cover the costs of this incompetence, the Government could put up fees again. The Deputy Prime Minister said that he got it wrong on tuition fees in his last manifesto. Will he now confirm that the next Lib Dem manifesto will rule out any further tuition fee increase?

There is absolutely no need for a further increase. In fact, we announced at the end of last year that universities will be able to take an unlimited number of students. We are removing the cap on the number of British students going to British universities and there is no cap on the number of overseas students, so there is no need for an increase. The right hon. and learned Lady talks about the figures and the cost. What is the cost for individual students? Someone earning £24,000 was paying £67.50 per month under the fees system that her Government introduced. Under our system, they are paying not £67.50 per month, but £22.50 per month. Is that not the reason why, despite all the Labour party’s predictions that people would not apply to university, applications have gone up? Is that not the reason why, despite all the predictions by the right hon. and learned Lady and her colleagues that fewer people from disadvantaged families would go, the proportion has gone up? Those are the facts that really matter for students these days.