Today the UN is expected to declare the famine in the Horn of Africa has spread to another region of Somalia. Returning from her visit to Dadaab refugee camp and severely drought-stricken areas of the Horn of Africa with Islamic Relief, Harriet Harman MP, Labour's Shadow International Development Secretary and Shadow Deputy Prime Minister:

"The famine in the Horn of Africa is causing suffering for millions of people and is set to get worse.

"Anyone who sees it first hand can be left in no doubt that our Aid is essential and the work of the Aid agencies heroic. But the famine is far from over and is set to get worse. More Aid is needed - so other countries must, as Britain has done - give resources that are so desperately needed.

"Our Aid is vital to prevent death and suffering. Our role internationally must be not only to provide Aid but to ensure greater action to prevent the instability and conflict that causes such suffering and threatens stability not just in the Horn of Africa but in the wider world, including the UK.

"I pay tribute, in particular to the work of Islamic Relief - not just for their work in North East Kenya - but also for the work that they do for the people in the most dangerous and unstable areas of Somalia. Everyone who donates to them can be proud of what they have contributed to."

Islamic Relief's UK Director, Jehangir Malik, thanked Ms Harman for her interest in the charity's work and her commitment to improving the effectiveness of emergency aid.

"By making time to visit one of the most remote parts of north-east Kenya, Harriet Harman has seen for herself how vital and effective it is to get Aid to people in their home villages, before hunger forces them into walking huge distances in search of food and water. Islamic Relief's main focus is to get support to people in the remote areas worst affected by the drought, such as Wajir and Mandera in Kenya and Bay, Bakool and Lower Shabelle in Somalia. We strongly support Ms Harman's call to establish a new International Emergency Fund so that the UN and other agencies can act more promptly and are not held up by the drawn-out process of appealing to the international community when so many lives are at stake." 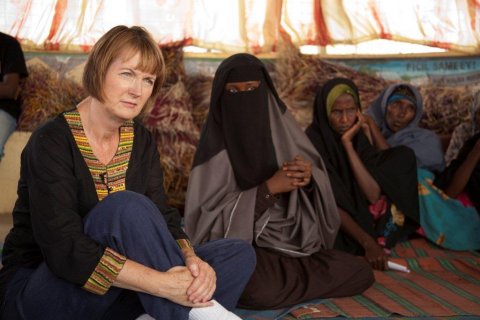