Harriet Harman MP speaks to Parliamentarians on the issue of sla

Mark Hendrick MP organised an event in Parliament on Tuesday that celebrated the achievements of the Society for Effecting the Abolition of the Slave Trade and discussed contemporary slavery and human trafficking. Guest speakers included Harriet Harman MP and the Director of Anti-Slavery International, Aidan McQuade.

Deputy Leader of the Labour Party and Shadow Secretary of State for International Development Harriet Harman QC MP stated: "In order to make a difference we need to create a more equal world. People who have prospects do not become slaves.

It is important that the government does not turn back the clock by making unnecessary cuts to law enforcement that harms Britain's effectiveness in the fight against human trafficking. The key to making a difference is international cooperation. The government needs to work closely with Eurojust and our colleagues in Europe. We cannot afford to be Eurosceptic."

Mrs Harman went on to discuss the disproportionate impact that human trafficking has on women and girls and spoke about the role the sex industry plays in contemporary slavery:

"There is a debate on whether women who become prostitutes do so out of free choice. I believe that we need to make it a criminal offence for any man to pay for sex. By stopping someone freely entering into prostitution we are helping her sisters elsewhere who are sex slaves are who are repeatedly raped ten or fifteen times a day.

I recently discussed these issues with Michele Bachelet, the inspirational head of UN Women. I am in the process of launching the UN Women All Party Parliamentary Group and I urge all Parliamentarians to join to demonstrate that Britain is serious about tackling the rights of women around the world." 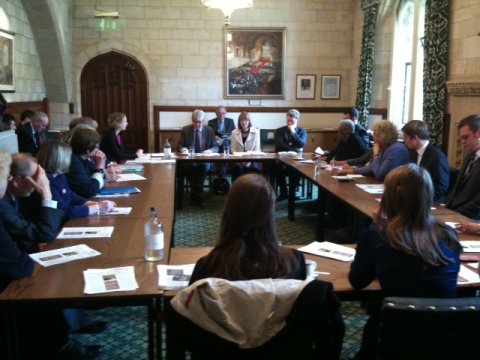