Meeting with members of the Somali Community to discuss what is 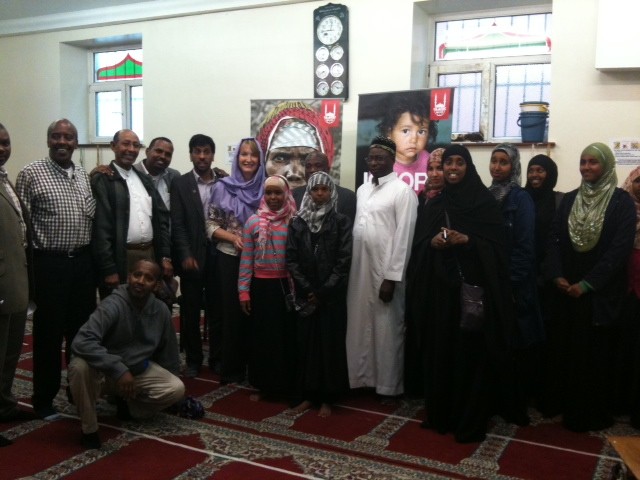 The meeting brought together a variety of organisationsconcerned by the growing crisis in Somalia and the wider Horn of Africa. Among those represented werethe Southwark Somali Refugee Council, the Somali Elders Group and the Somali Integration Team, an organisation which supports Somali women.

The droughts which have afflicted parts of East Africa are the worst in 60 years and have devastated cattle and crops creating a humanitarian emergency. The number of those in need of assistance across Kenya, Ethiopia, Somalia, Uganda and Djibouti has risen to over 12 million.

Famine has taken hold in five areas of Somalia. This is threatening the lives of over 3 million people - nearly half of the population. They need urgent assistance.The situation in Somalia is made worse by ongoing instability and conflict which means getting aid to the people who need it is extremely challenging.

Over 1,000 people are arriving each day in refugee camps in Kenya and Ethiopia to escape the drought which has destroyed their livelihoods and the famine which threatens their lives. The trigger for this massive movement of people from and within Somalia is directly attributable to the drought, but also to the ongoing conflict in southern Somalia which has restricted access for humanitarian agencies.

The world must recognise the scale of the humanitarian crisis we are facing and take urgent and effective action. Despite appeals by the United Nations and aid agencies over $1 billion is still needed.

We talked about the need for increased international action and funding to tackle the famine in the Horn of Africa. Although the UK Government has responded swiftly and generously, other countries have not done so. I emphasised how important it is that thosecountries step up their efforts and meet the urgent need for funds.

As well as the immediate humanitarian response, long-term action is needed.  Where there has been development investment, communities are more resilient when drought hits there must be greater international efforts to protect and sustain food supplies in the longer term including greater efforts to tackleclimate change and to stop the speculation on food which causes prices to soar in the developing world

Aid agencies, such as Islamic Relief, are doing very important and very demanding work in challenging circumstances in the Horn of Africa to ensure assistance gets to the people who need it. I paid tribute to them and to the generous response of the British public, including Diaspora communities, who have donated over £42 million in just three weeks.

We need to recognise and draw on the commitment and knowledge of the diaspora community from countries in the Horn of Africa.  They hear from friends and family what is happening and know what needs to be done and where the need is greatest.

The UK government should do more to involve the diaspora communities in our response to humanitarian crises and in particular recognise the importance of remittances.

The members of the Somali Community present raised a number of issues including:

• The difficulty of getting aid to the areas affected by conflict in Somalia.

• The importance of working through local NGOs and community groups, where possible, to ensure that aid gets to those in greatest need.

• Concern that action to prevent famine taking hold had not been taken early enough. They asked why the world had failed to take action when warning signs had been evident long in advance of the onset of famine.

Concern that the international response to the famine had fallen short.

• The important role that Somali women in the UK have played in raising funds and awareness of the situation in the Horn of Africa.

• I will be visiting the Horn of Africa with Islamic Relief later this year and will report back to the Somali community on my visit.

• The next meeting of my Southwark International Development Advisory Group will focus on the famine in the Horn of Africa.

• I also informed those present of plans to establish an All-Party Parliamentary Group on Somalia.Rushanara Ali MP, the Shadow International Development Minister, is leading in setting up this group which will provide an important link to the Somali community and will means that there will always be a group of Parliamentarians, from all parties, who will ensure events in Somalia receivesattention.

• I committed to report the issues raised at the meeting with the Secretary of State for International Development, Andrew Mitchell MP

• I will continue to work to ensure the famine in the Horn of Africa receives the attention needed through Parliamentary debates, tablingparliamentary questions and in the media.

The meeting was organised by Islamic Relief, an international aid organisation which is working in the Horn of Africa to get help and support to those who need it. More information on Islamic Relief can be found here http://islamic-relief.com/

Also present were the President of the Muslim Association of Nigeria and the Deputy Imam of the Old Kent Road Mosque, Haji Alijah Yusof