I met them along with Dan Jarvis (Shadow Culture Minister) and local campaigners, who have been working to restore the station and bring the listed building back into community use.

Tristram Hunt MP said:
“The history of Peckham Rye is the story of London during its most furious period of growth.  It represents a powerful moment in London’s history, when the suburbs started to celebrate their way of life with new town halls, parks, museums and swimming pools beautifying the soulless suburbs.

“With its double-height booking hall, stunning iron-work, and round-arched windows, nobody could deny Peckham Rye station’s contribution to that process”.

Christian Wolmar said:
“Stations are the hub of communities and play a vital role in ensuring an area thrives. Peckham Rye station has been neglected over the years and allowed to decline, hidden behind a set of 1930s shops. Now it is being restored and brought back into the heart of the community.  I support all the efforts of those who have worked tirelessly to restore the station to its former grandeur, including Southwark Council and local campaigners.”

Dan Jarvis MP said:
“Peckham Rye Station is a fine example of the architectural treasures we can find in local communities, and what can be achieved by local organisations working in partnership to preserve our local heritage and history.”

Tristram Hunt has written about the visit in the Evening Standard.  You can read his column here. 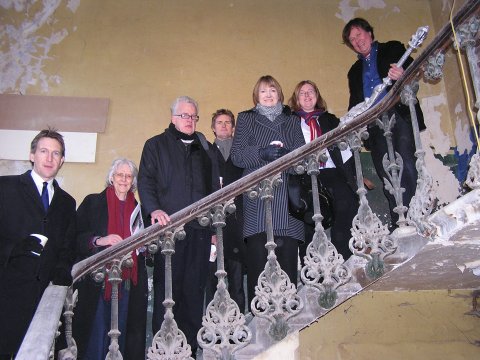