Southwark is a real centre of arts and creativity.

Earlier this summer, I saw an outstanding performance of Vera, Vera, Vera at the Bussey Building in Peckham by the Royal Court’s Theatre Local.  And I joined Theatre Peckham to see the work of many of their talented performers including Ronald Nsubuga, who has just won a place in drama school and is one to watch for the future.

Theatre Peckham has been teaching theatre skills, organising shows and providing access to professional technicians, writers and coaches to young people in Peckham and around Southwark for 25 years.   Last year more than 1,500 young people took part in their classes and related programmes.

As well as fees from parents, Theatre Peckham receives money from the Arts Council and Southwark Council, so they can offer classes to everyone, including those whose parents can’t afford to pay.

But that funding is under threat.

The Labour government tripled investment in the Arts Council.  But the Tory-Lib Dem government has cut it by one third.  And at the same time the government cut education funding by 13% and slashed local authority budgets.

This means there is less money to make sure culture in Southwark is open to all.  And culture should available to everyone particularly to young people in South London who are not only avid consumers of culture but are also creators and cultural leaders of the future.  And many will want to work in the creative industries in the future.

Developing young people’s interest in the arts is essential, but with cuts to arts in schools, it’s getting harder for colleges and universities - like our world famous Camberwell College of Art -to fill their arts courses. The government’s cuts are hurting the arts at every level and making arts and culture less accessible.

Instead the government should be looking at ways to invest in and supports arts and culture.  Working with other members of the Shadow Cabinet including Labour’s Shadow Business Secretary and Streatham MP Chuka Umunna, I am developing a five point plan for jobs and growth in the creative industries.  A key pillar of the plan is developing young people’s skills - making sure that the next generation not only have the chance to develop their talent but also to have the right education and skills to be the designers, technicians, musicians and animators of the future. The creative industries must be an avenue of opportunity for all. 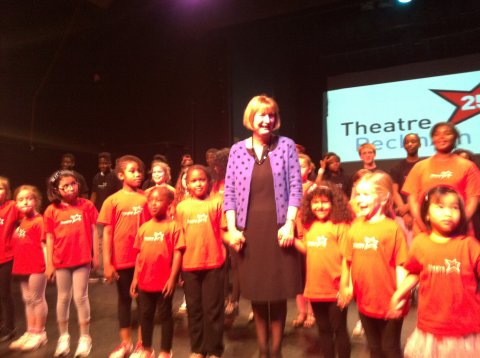