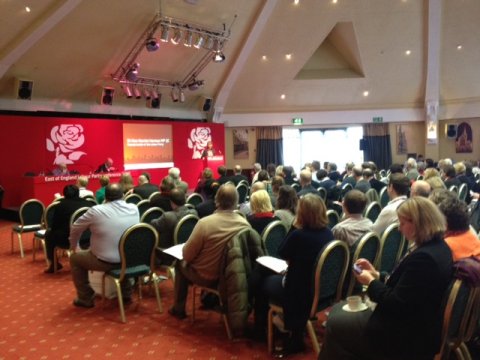 Labour held its East of England Regional Conference this weekend in Norwich. The Conference, was attended by around 300 Labour members and supporters from all over the East of England. I opened the conference on Saturday and spoke about how we are now in the mid-point between the last General Election and the next. People are beginning to lose faith with the Government as their promises are not materialising. David Cameron said his key priority was cutting the deficit, however, borrowing is going up not down, prices are still going up faster than wages and there are still nearly one million young people out of work.

Throughout the weekend there were also presentations by Shadow Cabinet colleagues including, Maria Eagle MP on Transport; Chuka Umunna MP on Business; Hilary Benn MP on Local Government; Caroline Flint MP on Energy and Climate Change and Shadow Chancellor, Ed Balls MP on the economy and his role as regional champion for the Eastern region.