Speaking to the NGOs 'Tea Time for Change' lobby of parliament -

This afternoon I welcomed people from Camberwell and Peckham to parliament to take part in the Tea Time for Change lobby.

The event was organised by charities fighting the causes of global poverty including Southwark based Save the Children.

After meeting with people from Camberwell and Peckham, I gave a speech to the lobby. 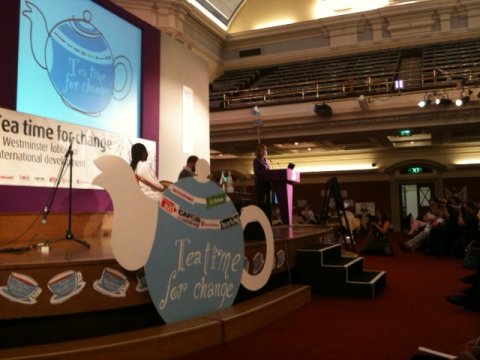 The text of my speech is below:

So thanks to all those who have played their part.

Our aid agencies in this country are important above all for the work that you do on the ground in developing countries - but also for the arguments you make:

And most importantly thanks to all of you who have travelled from my constituency and across the country to show how important you feel it is that we do not turn our backs on the world's poorest people.

All the main political parties support the commitment which Labour led on - .7% by 2013.

But the climate created by the coalition government's deficit reduction programme has made it harder to win support for that change.

We must not make the world's poorest pay the price of a global financial crisis precipitated by the international banking system.

Nothing has changed in the arguments that we can and must - with just a tiny fraction of our income - save lives, give opportunities and help communities on the path to sustainable financial independence.

So we must work together to support the government in keeping the promise that they made and winning the argument for Aid. And that is why we have launched the Keep the Promise campaign which you can sign up to online to show the support there is across the country - from the diaspora, from faith groups, from NGOs, from Members of Parliament - for the .7/2013 promise.

And that is also why the Government must  bring forward immediately the legislation they have promised to ensure there cannot be a shadow of a doubt about their commitment to that .7/2013 promise. And if they don't, a Private Member's Bill should be brought forward.

But aid is not just a matter for governments.  It is also about global companies.  Many developing countries are rich in natural resources - in oil, diamonds, and precious metals - but their people go hungry.  Businesses can play a major part in helping development.  But they can also be an ugly force for exploitation - the unacceptable face of global capitalism

The OECD calculate that more is lost to developing countries in tax dodging than is paid to them in Aid - that can't be right.  We want the British taxpayers through DFID to continue to play their part but the government can and must act to ensure that businesses play their part too.

We strongly back the Publish what you Pay campaign.  We want the government to require companies to show what they pay in the developing world - country by country.  So that the world can see whether the relationship between a multibillion dollar multinational and a poor country is fair.  And so that the people in that country can see that too - and hold their leaders to account

Development is about rights and justice - not just philanthropy.

And that's why we back the demand that within Europe, in the G8 and in the G20 the Prime Minister leads on how we make the financial sector play its part in extra finance for development to tackle global poverty and climate change.

But aid is not just about what the government can do and what the private sector does- it's also about the remittances which are sent by the diaspora communities.  In my constituency of Camberwell and Peckham there are people from Nigeria, Ghana, Sierra Leone, Ivory Coast - working hard and bringing up their families - but also supporting their village and their relatives back home.  It's the same for diaspora communities all around the UK.  I call them "the hidden heroes of international development" and we need to do more to support the role that the diaspora communities play - and this is something we will be focussing on as we review our policies.

As we sustain and increase our commitment to global development - we must always listen to the voice of those in developing countries.  And that means women in those countries too.

For many years now it has been recognised that empowerment of women is key to development, but we need to turn that from rhetoric to reality.

We should back the demands for women in developing countries as they struggle for equality, like the women in Tahrir Square, some of whom I met last week. They are demanding the Social Justice, Dignity and Freedom they are entitled to.

We can help them by making sure that we foster equality in how we give our aid - that is not the old neo-colonialism or the self-interest of tying of aid to our trade interests - it is about backing the demands of women in those countries.  I call that progressive conditionality.

The new UN Women's agency - working with UNDP and UNICEF - is a vital step forward. Our Government here and Governments across the world must support it and its inspirational head Michelle Bachelet to ensure it can deliver for women across the world.

So again thank you all for being here today. You have sent a powerful message that our aid works but you have also made it clear that you want the Government to do more.

Take action to tackle the core issues of inequality and injustice that keep people across the world trapped in poverty.

Take action to recognise diaspora communities and their contribution to tackling global injustice.

Take action to back the demands of women in developing countries and ensure their voices are heard.

So, they must build on the commitment and leadership we took on development when we were in government and show that Britain keeps its word.

Not only to the British people but to people who are forced to live in poverty across the world.