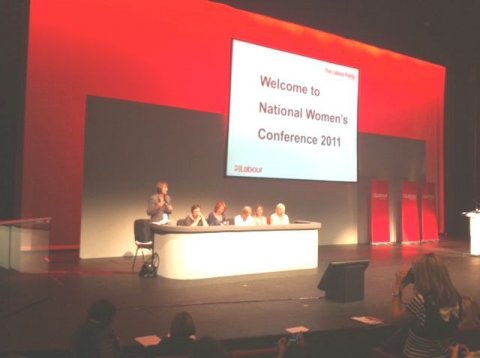 This morning I spoke to Labour's Women's Conference. The text of my speech is below:

I’m delighted to see you all here today and excited to hear all you’ve got to say.

It is right to remind ourselves why we are meeting as women, as Labour women, today.

It is because we want to meet together as women, party members, MEPs, MPs, councillors, trade union women, Labour women from the Lords, to discuss what women want and what we are going to do about it.

And those policies delivered results.

We did – working with the police, the prosecutors, the courts and Women’s Aid and Refuge – transform the response to domestic violence. Again, further action was needed but it made a huge difference. And now the cuts threaten the support programmes for domestic violence, victims and councils will find it harder to support women’s refuges as the cuts bite.

And we did get all women shortlists so that we have more Labour women MPs than all the other parties put together. But we are still outnumbered by men 3 to 1 and we’ve still got further to go on Labour representation of women in councils. And I hope that tomorrow the Labour party will – as part of Refounding Labour – make the historic decision that we will always have a woman in Labour’s leadership.

But today it’s our chance to share what we think the priorities are for women right now.

Women of all ages. Women of all ethnicities. Women from all walks of life. And we need to look from the viewpoint of all the different women.

But it’s our responsibility and our opportunity to speak up for women and to shape demands so that Labour policy and Labour campaigns improve their lives.

I know that today, as well as focussing on domestic violence, women as carers, how to make work more family friendly, and childcare, we’ll focus on what women want in relation to:
• women’s pensions.
• sexualisation of girls.
• pornography and prostitution.
• the portrayal of women in the media.
• women in the developing world.
• how older women – instead of being respected for their experience - face a toxic combination of ageism and sexism.
• and the demands of those women who were part of the Arab Spring and who want to have a say in the future of their country.

We will discuss how we can campaign together, in our local communities and at national level, against the impact of the unfair Tory cuts on women; against the shame of the Tories failing to implement and enforce the Equality Act; and to increase women’s representation throughout our party.

We may be in opposition and we may be, as yet not equally represented in our Party, but we are not powerless. Far from it,

We have exposed and pushed back the Tories on women’s pensions.

We have forced them to drop their proposals to make it harder to prosecute rape by giving rape suspects anonymity.

And even though the Tories and the Lib Dems have dropped a key Equality Act clause on making employers publish what they pay on average to men and what they pay to their women, our sisters in the Trade Union Movement will get the support of their members to put it on the agenda for collective bargaining.

But above all we are powerful because we are here together, we’re determined and because we are speaking up for the concerns of women in this country.

Women’s conference has never been top down, nor is this one. It’s going to be a conference of women speaking from the floor rather than speeches from the platform.

You will decide what our priorities should be and vote on them. That will be reported back and Ed Miliband will hear that report back.

This is going to be a brilliant conference. Let’s get on with it.