Police officers from Southwark and around the country went on the march today to highlight the Tory-Lib Dem government's huge cuts to police numbers and the risk to crime and public safety.  I joined police from Southwark to support them in their campaign against these damaging cuts to police.

People in Southwark are worried and the last thing people want is fewer police on the streets.  But it’s not just about cuts to police numbers, it's also about the loss of expertise when senior officers are forced to retire.

Last year Tessa Jowell and I asked Simon Hughes – as a Southwark MP - to sign our petition calling on the Government and the Mayor of London to protect police officers in Southwark, but he refused.

Now the Tory-Lib Dem government is cutting the Police’s budget by 20%.  This means fewer police officers in Southwark.  The cuts are already starting to bite.  Between January and August 2011 the number of police officers in the borough fell from 1071 to 1028.  And it’s set to get worse.  16,000 officers across the country are going despite the Tory-Lib Dem government’s claim that the frontline would be protected.  Labour is calling on the government to change course. 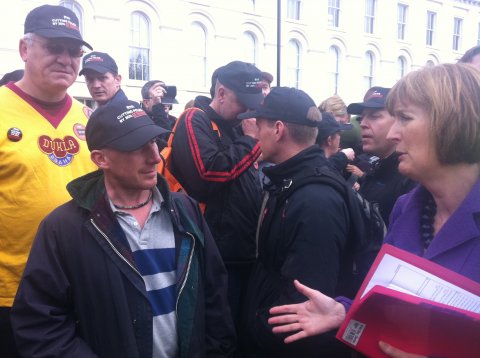