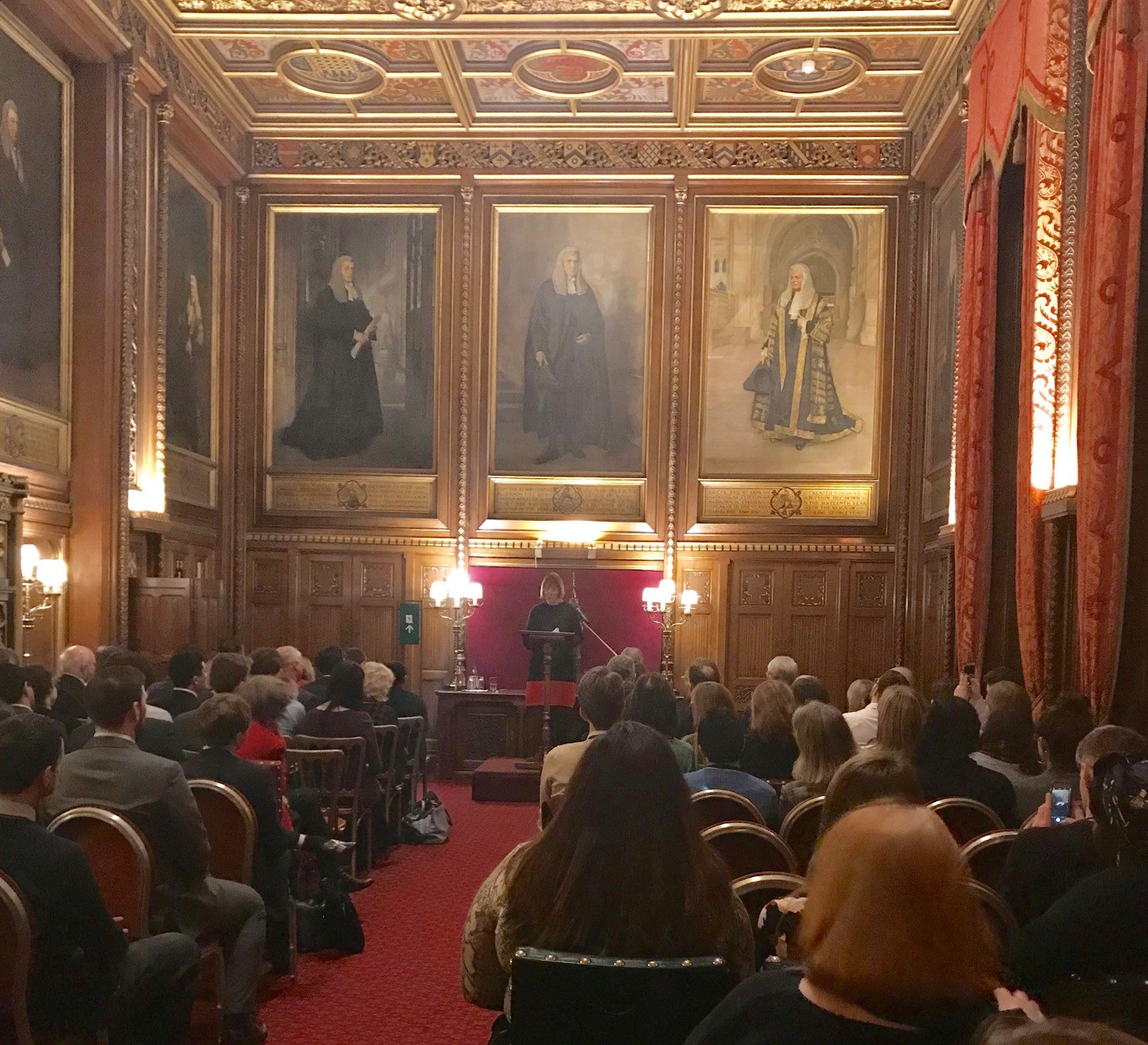 I was honoured to give the Tony Benn Memorial Lecture. Brexit has caused instability and division in bucketfuls. But Parliament has discovered it can put its foot down when the Government treats it with disrespect. Brexit has strengthened parliament - and that is now something worth fighting to retain. Read my speech here and my Politics Home article here.

I was honoured to give the Tony Benn Memorial Lecture. Brexit has caused instability and division in bucketfuls. But Parliament has discovered it can put its foot down when the...

Writing ahead of the Tony Benn Memorial Lecture, Harriet Harman says Brexit may have caused instability and division in bucketfuls. But it has also reminded us just how much Parliament matters – and that’s something worth fighting to retain:

Nearly everything in politics has been changed by Brexit – and parliament is no exception. Long-standing tensions about Europe in the Tory party have stormed into the public domain and with that a giddying turnover of ministers. Cabinet ministers used to be able to count on courtesy and respect from newly elected backbenches – but no longer. On the Labour side, our divisions on Brexit, though less ideologically toxic than the Tories’, have a problematic regional dimension. Labour friends find their positions pulled apart by whether their constituency voted leave or remain.

The normal set patterns of the parliamentary year have been thrown up in the air with recess cancelled, business changed at the last minute and no-one knowing what’s going to be happening until the day before.

The toxic combination of Brexit and the anonymity of social media has turbo-charged threats against MPs which demand to be dealt with. No MP should have to put up with threats to themselves and their family, of rape and murder.

People hate instability and division and Brexit has brought that in bucketfuls. But paradoxically, some of the changes precipitated by the chaos are, nonetheless, valuable.

There’s a dramatic weakening of the power of the whips. Government whips who manage to lose a vote by 230 don’t seem invincible any more. And on the Labour side some of the Whips themselves voted against the whip and yet remain in their role. The default position of Members voting with their whip can no longer be taken for granted. MPs can’t just be told how to vote, a case has to be made and won. Loyalty to the party which chose and elected you is valuable but it’s a good thing that blind loyalty is less prevalent.

Brexit has been complex and beset by detail. Step forward the Brexit Committee under Hilary Benn, the Home Affairs Committee under Yvette Cooper and the Business Committee under Rachel Reeves to expose what’s really going on. That ascendancy of the select committees is an invaluable rebalancing between the Government and parliament – in parliament’s favour.

Parliament has discovered it can put its foot down when the government is treating it with disrespect. For some time the Government has been boycotting Opposition Days and ignoring parliament’s expressed view. That’s come to an end with the House ruling that the Government was in contempt of parliament and ordering that the Attorney General’s advice be made public. As the government struggles there’s a new sense of just how much Parliament matters.

With the weakening of the party power hierarchies and the strengthening of Select Committees has come a new phenomenon of cross-party working. Working with others from different parties used to be for grandees who’d given up on party politics or for single issue campaigns. But it’s become entrenched now in a completely new way.

As a newly elected Member, it was years before I even spoke to a Tory MP but just as the profoundly important issue of Brexit has opened up fissures within the parties, so it has created new alliances across the parties.

The new members – from both sides – who arrived in 2017 are as likely to search support for their campaigns from the other side as they are from their own. And that’s a good thing too.

It’s hard to know if the positive changes that have emerged out of the Brexit chaos will endure when Brexit is no longer an issue (if ever that day comes). But the constitutional crisis it has precipitated has reminded parliament that we, not the Government, are democracy. And that’s invaluable and worth fighting to retain.

Writing ahead of the Tony Benn Memorial Lecture, Harriet Harman says Brexit may have caused instability and division in bucketfuls. But it has also reminded us just how much Parliament matters –...

The Human Rights Committee has published our report into human rights and trade post-Brexit. We were concerned that human rights are not part of the consideration in new free trade deals currently being negotiated by the Government. The Human Rights Minister told us he didn't even know if human rights were in the newly signed Israel-UK trade deal! Rights should not be an  ‘add-on’ to international trade agreements, but be embedded from the outset. We are demanding Parliament’s Human Rights Committee remit is widened so we can check these agreements.

UK must not become weak link for human rights post-Brexit

The Human Rights Committee has published our report into human rights and trade post-Brexit. We were concerned that human rights are not part of the consideration in new free trade... 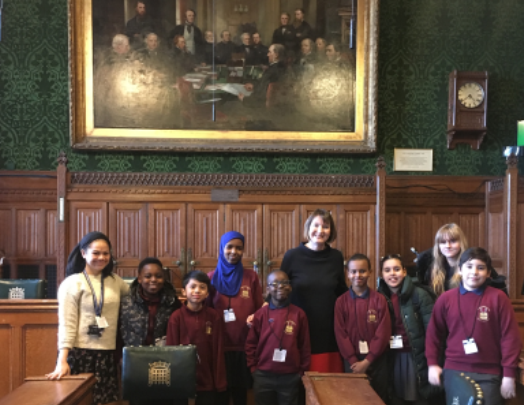 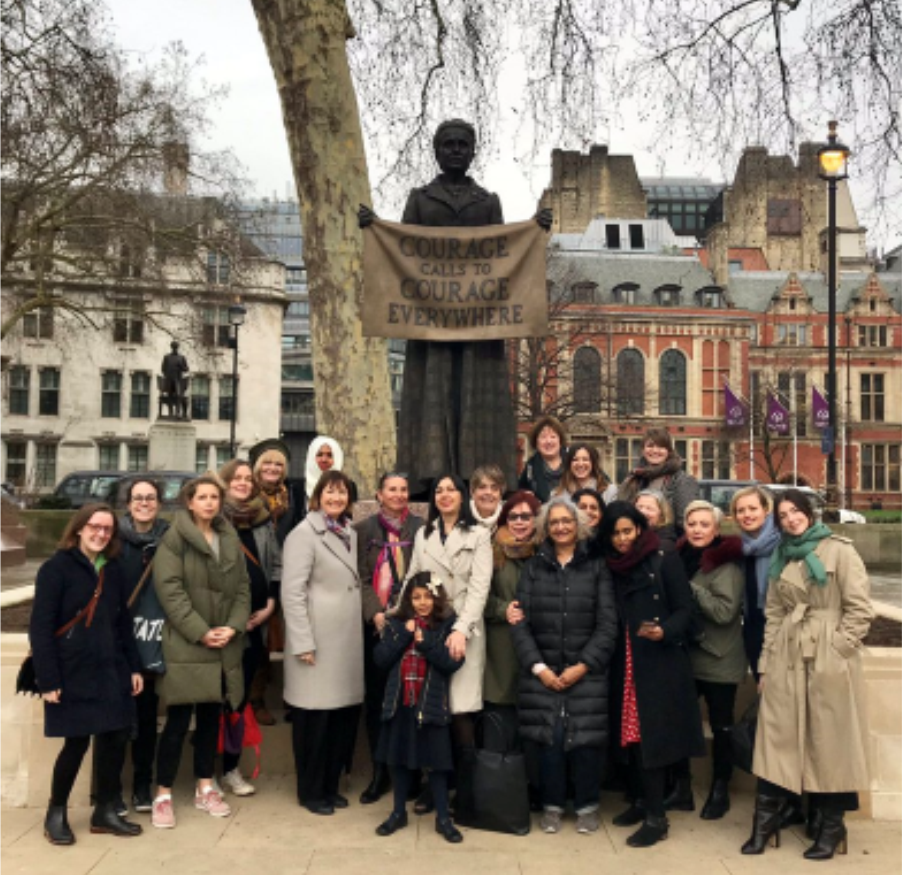 #IWD is the moment every year when we pat ourselves on the back for the progress we’ve made but also take stock of just how much further we still have to go. It was great to welcome Camberwell & Peckham Labour Women’s Forum for a tour of Parliament to mark the day! Women are still change-makers and that is a battle. Things are much better in my generation than they were for my mother, and they’re better for my daughter’s generation, but we cannot rest. Read my #IWD2019 articles in The Times & Harpers Bazaar.

#IWD is the moment every year when we pat ourselves on the back for the progress we’ve made but also take stock of just how much further we still have to... 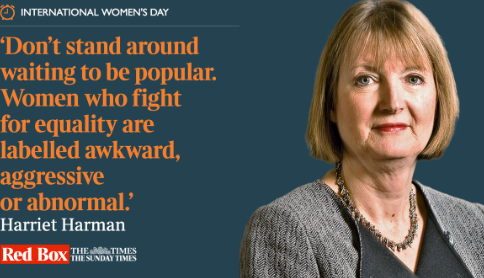 International Women’s Day is the moment every year when we pat ourselves on the back for the progress we’re making on women’s equality and bemoan just how much further we still have to go.  But having made monumental change from the position of women in my mother’s generation, we have learnt a few lessons.  *change is possible - even when everyone is telling you it isn’t. *it needs resilience and persistence - even the most obvious change can take decades. *you will face a backlash which is often personal and threatening.  The more progress you make and the more women’s voice are heard the greater the misogynist backlash.  And it’s always nasty. *It’s not possible to make change as a woman acting alone.  It’s the solidarity of women working together which does it - not a few inspirational leaders. *don't stand around waiting to be popular.  Women who fight for equality are labelled awkward, aggressive or abnormal. But *women sticking their neck out for change will always have the support of millions of women who, like us, rail against unfairness and the discrimination they all face in their own lives.

And that’s how we’ve gone from a situation where women were defined by their role in a household dominated by a man - daughter, housewife, mother, - to a situation where nearly everyone agrees that women are not inferior to men.  But though we’ve won the arguments the reality still needs more work.  Few would argue that women should be paid less than men at work.  But 8 out of 10 employers still pay their women less than their men.  No-one condones domestic violence - like they used to. But still women’s eyes are blacked, their ribs broken and their children terrorised by men who are their husbands or boyfriends.  No-one would, any more, argue that men should make the decisions and women should abide by them.  But where decisions are to be made whether it’s in politics or business or any other field, it’s the men making the decisions even if they have to rely on women to implement them!

But though it’s depressing to see misogyny centre stage in America’s White House and the burning injustice of women in the developing world, we shouldn’t understate what we’ve achieved.  The Women’s Movement’s quest for women’s equality has been the most enduring successful political movement of my lifetime.  And the prospects for more progress are strengthened by the arrival in Parliament of more women than there have ever been.  And whilst it used to be only on the Labour side that women were arriving in numbers, there are now women in the Tories who see themselves as feminists and are pressing for progress.  With more than 200 hundred of us, if we women MPs can find a way to work together on a consistent basis, we might just turn out to be the most coherent force in a fractured parliament.

International Women’s Day is the moment every year when we pat ourselves on the back for the progress we’re making on women’s equality and bemoan just how much further we... 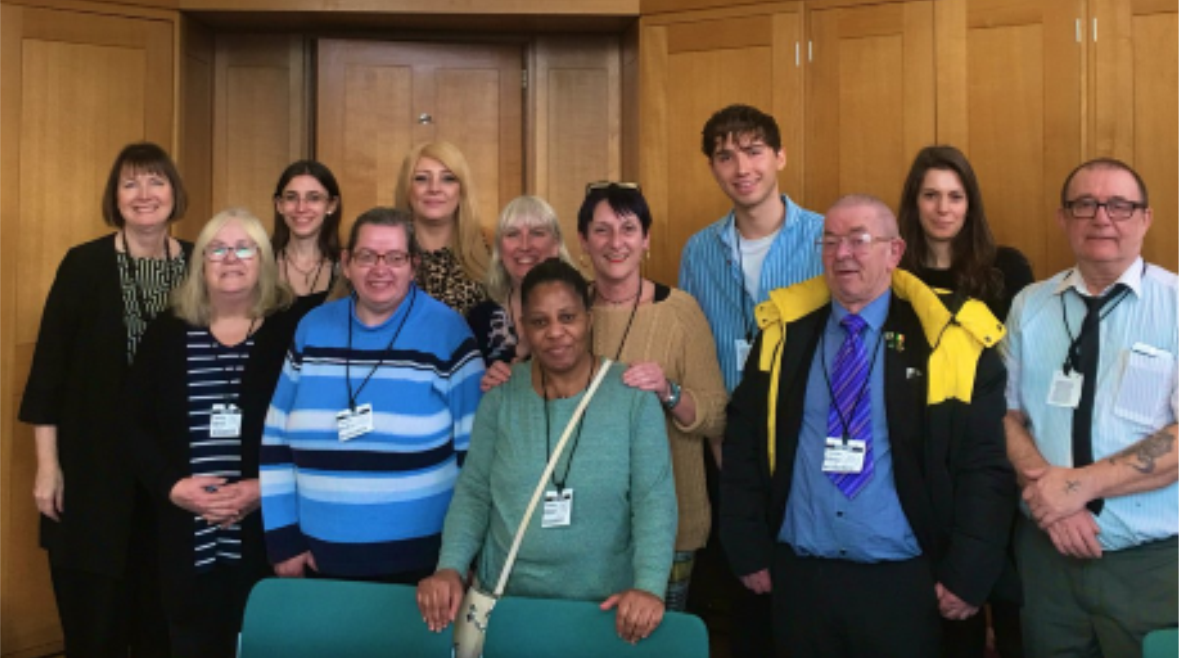 Great to welcome anti-poverty   campaigners ATD Fourth World , Thrive Teeside & Joseph Rowntree Foundation to Parliament on 5th March. We agreed it’s important to have people with lived experience of poverty at the heart of policymaking and we’re urging the Government to implement section 1 of the Equality Act to tackle wealth inequality.

People are the experts to reducing poverty 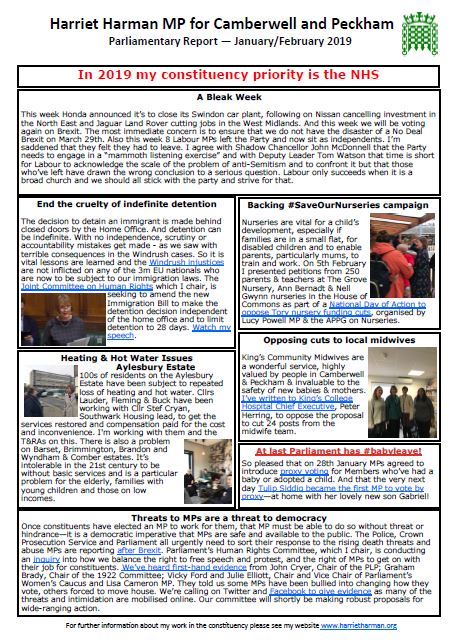 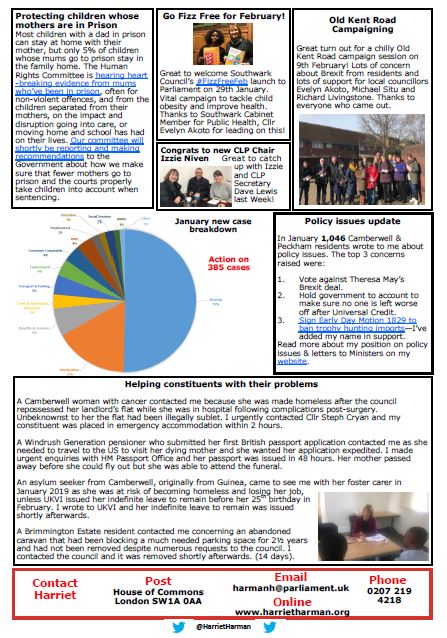 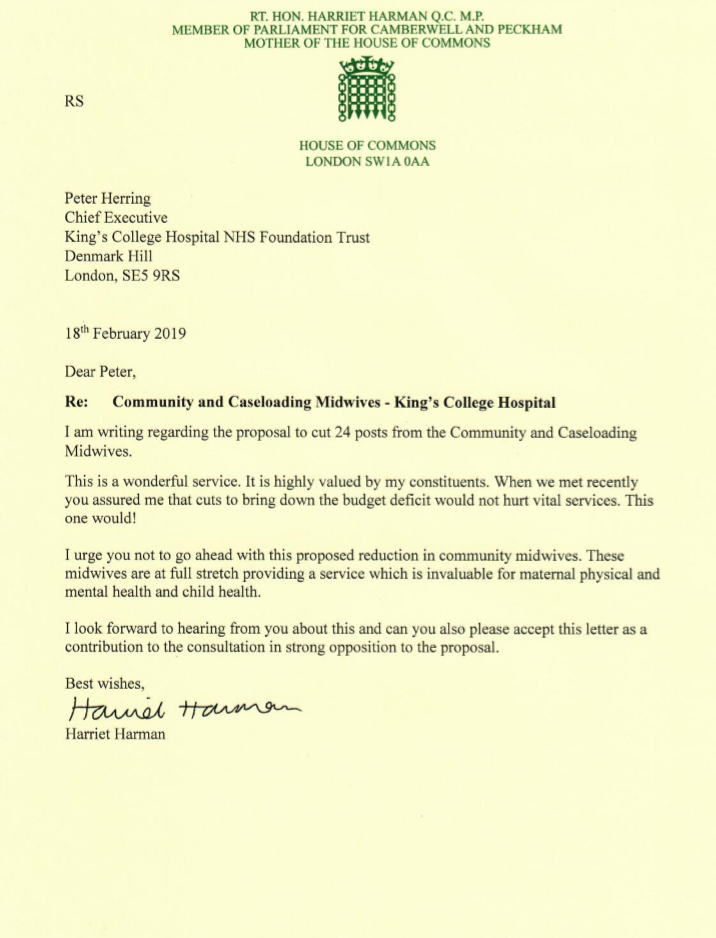 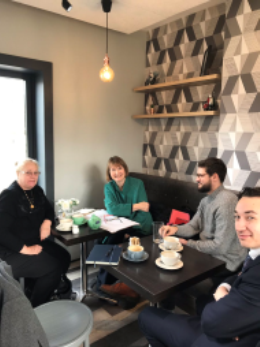