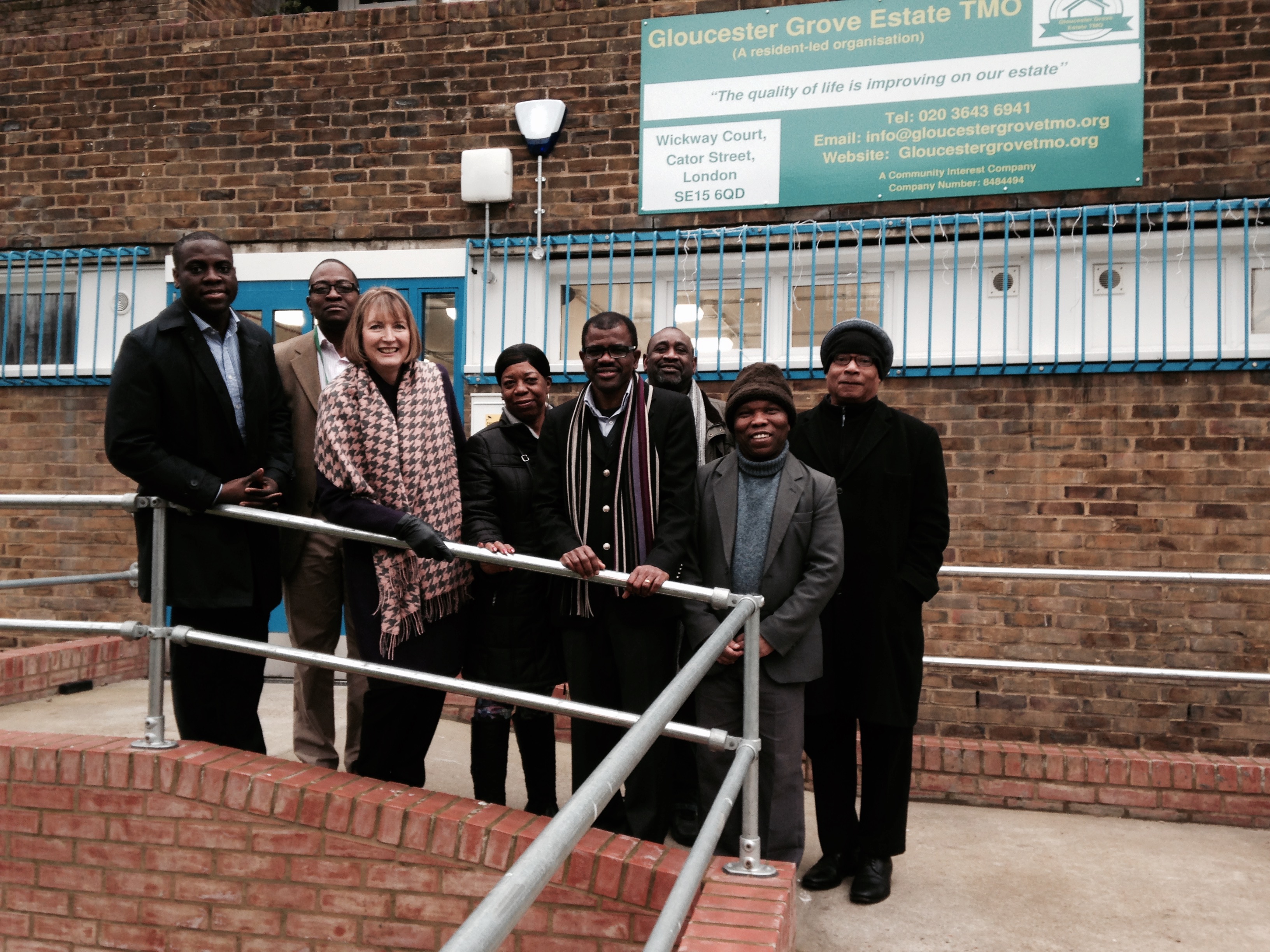 The Gloucester Grove estate is one of the largest estates in Peckham. The Tenant's Management Organisation (TMO) is responsible for managing the housing needs of all tenants and residents and I met Bassey Bassey (Chair of the TMO) and Abiola Olatunji (estate manager) to discuss residents concerns about the recent problems with heating and hot water.

The Gloucester Grove estate is one of the largest estates in Peckham. The Tenant's Management Organisation (TMO) is responsible for managing the housing needs of all tenants and residents and I... Read more 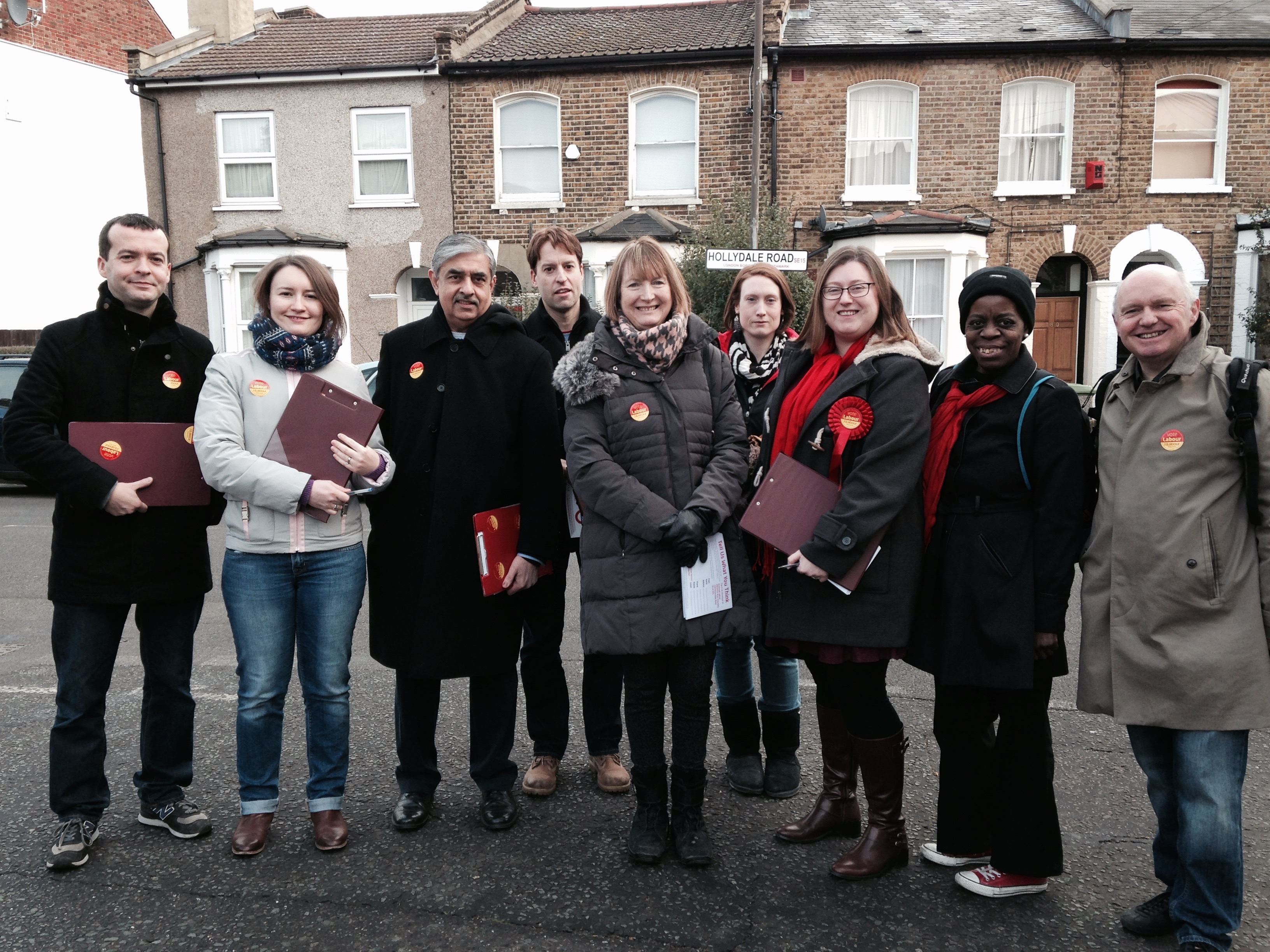 Joining our great local campaign team of members and councillors to talk to residents in Nunhead.

Joining our great local campaign team of members and councillors to talk to residents in Nunhead.

As you know estate residents have contacted me about the breakdown of heating and hot water on the North Peckham/Gloucester Grove estates in recent weeks.

It has been extremely inconvenient and uncomfortable for people to be without a reliable supply of heating and hot water, especially at this cold time of year. It will also have been expensive for residents to use the portable electric fan heaters distributed by the Council as a temporary solution.

I’m writing to ask for your assurances that the Council will take action on the following:

*To ensure the heating and hot water system is working and continues to stay working.

*For the Council to not charge residents for the period when they did not receive heating and hot water and to compensate them for the inconvenience.

*To ensure tenants have the opportunity to be involved in the independent review that will look at the whole heating system and recommend options for the long term.

Thank you for keeping in touch with my office and I will stay in close contact with the local councillors and tenants associations.

I know you are doing your best to get all this sorted out. 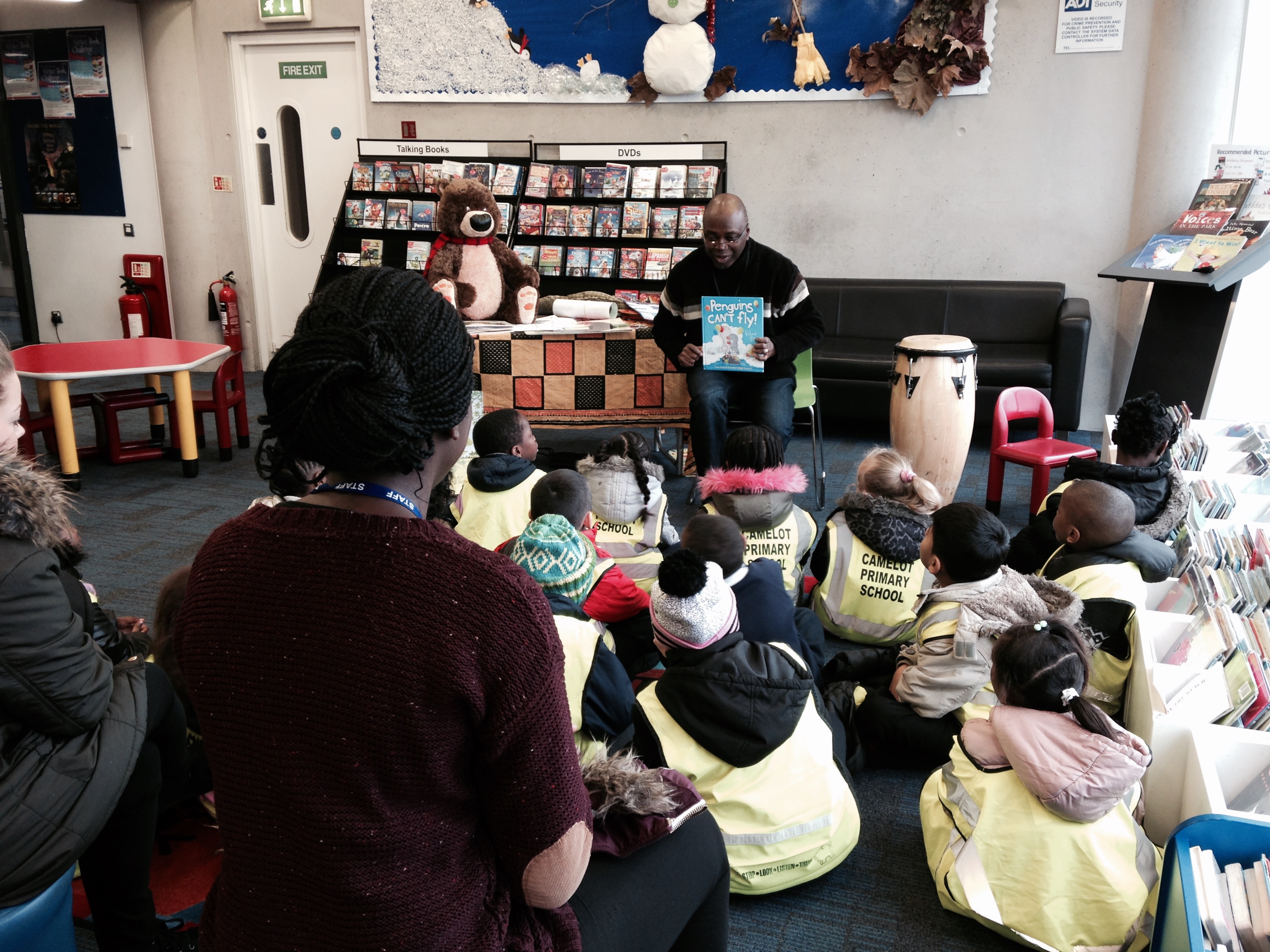 It's National Libraries Day on the 7th February when libraries around the country hold events to encourage people to visit, and highlight the importance of local libraries to residents, communities and the wider public.

It's National Libraries Day on the 7th February when libraries around the country hold events to encourage people to visit, and highlight the importance of local libraries to residents, communities... Read more

It was good to join Labour's candidate for Bermondsey and Old Southwark, Neil Coyle, to open his campaign office on Tower Bridge Road this weekend.  Lots of local members turned up for the occasion, and stayed around to campaign in the constituency afterwards. 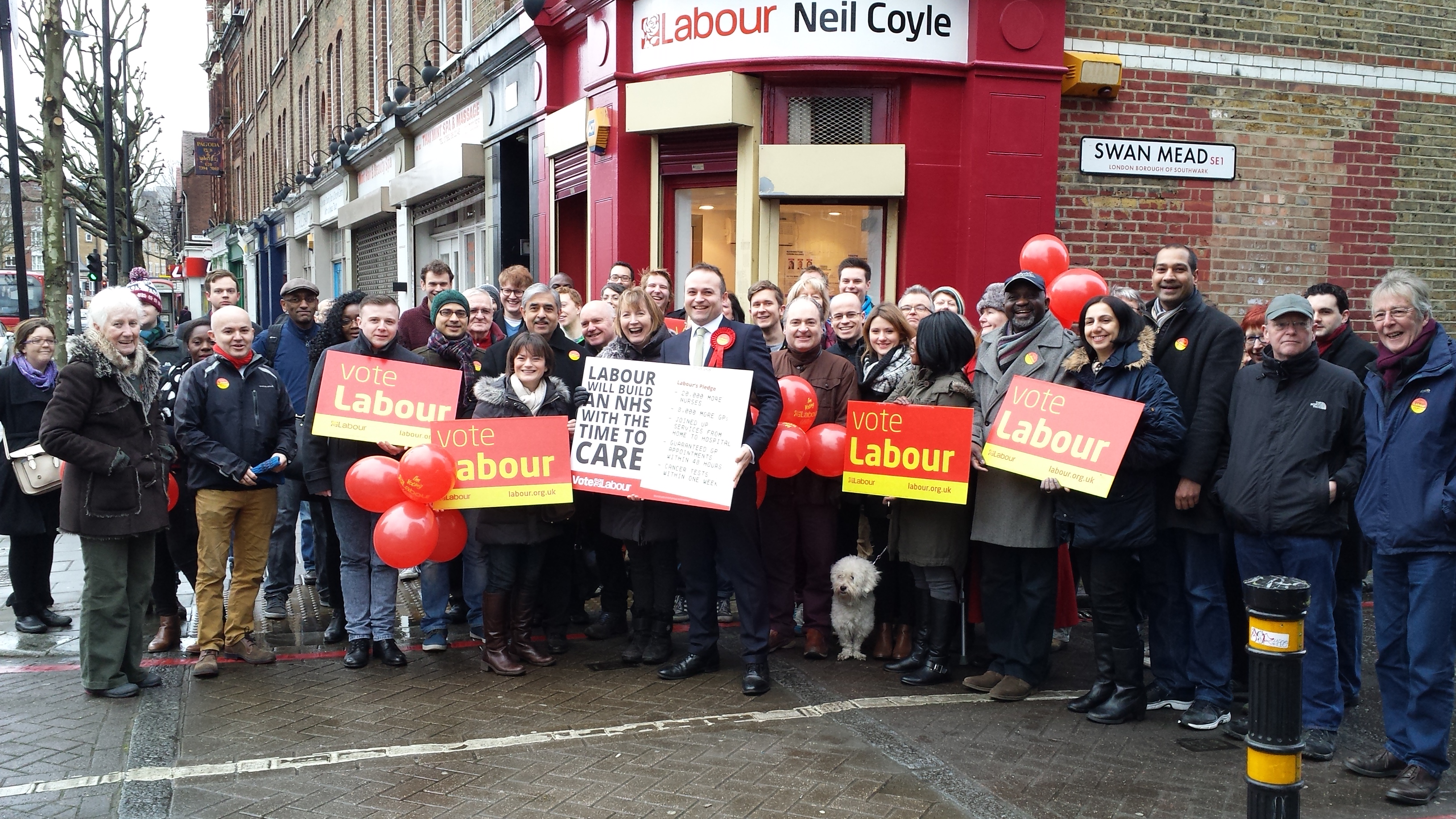 Campaigning in Bermondsey and Old Southwark

It was good to join Labour's candidate for Bermondsey and Old Southwark, Neil Coyle, to open his campaign office on Tower Bridge Road this weekend.  Lots of local members turned up...

Secretary of State for Work and Pensions

Discretionary Housing Payment funding for the London Borough of Southwark

I am writing to you about the Discretionary Housing Payment (DHP) funding provided by the DWP to the London Borough of Southwark, which includes my constituency.

DHP funds for the 2014-15 financial year were spent by the 31st December 2014 and I’m concerned that no additional funding has been forthcoming from the DWP. In October 2014, Southwark Council wrote to the DWP requesting additional DHP funding and was advised that a decision would be made shortly but to date no such decision has been communicated to the Council.

I’m concerned that without additional DHP funding, Southwark Council will not be able to continue to protect people affected by the Bedroom Tax which will mean an increase in evictions from both council and private rented accommodation, and consequently homelessness.

Because of the Bedroom Tax many people on low incomes in Southwark are struggling to keep their heads above water, finding themselves in debt and rent arrears for the first time. A number of constituents have contacted me desperately concerned about their rent arrears after being told by the Council that DHP funds are no longer available.

For example, a single mother from Peckham lives with her severely disabled daughter in a 3 bedroom property specially adapted to meet the needs of her daughter who has cerebral palsy and is a wheelchair user. When the Bedroom Tax was introduced, her housing benefit was reduced even though she needs the extra bedroom for an overnight carer. She applied for a DHP to cover the shortfall in rent, which was granted, and continued to receive payments until they were stopped at the end of September 2014. She re-applied for a DHP but the Council had to refuse her application because there were no funds left in the DHP budget. She is now in rent arrears of £150 and is anxious that this may lead to eviction proceedings.

While a number of local authorities, like Southwark, have exceeded their DHP allocation this year, others have not used significant proportions of their DHP funds. It’s unfair that the money to help people with their housing in Southwark has run out not because the Council has spent it unwisely but because of the high level of demand.

Please can you arrange for your officials to meet Southwark Council officials as soon as possible to discuss DHP funding arrangements for the remainder of this financial year, and make extra funds available for Southwark.

I look forward to hearing from you.

Sometimes it seems that environmental challenges like global warming are so big we can’t possibly do anything about them as individuals. Or we are so busy and stressed in our everyday lives that we don’t have time to think about it, or to take action.But tackling environmental issues - from climate change to energy use, waste to transport - is important for our future and in our daily lives we can all be doing something to reduce the harmful impact of our actions on the environment.

Here are my five key points for action:

*Recycling household waste: Putting waste in landfill sites is very bad for the environment as some waste contains toxic substances that leak in to our soil and groundwater, and food or plant waste releases methane which contributes to global warming. Two thirds of our household waste could be recycled or composted. Recycling is easy in Southwark – your recycling, food and garden waste can be collected from your home or you can take it to the Council’s Reuse and Recycling Centre on Old Kent Road. In Southwark we've doubled our recycling rates since 2010 but we should aim to divert more than 95% of waste away from harmful landfill.

*Saving energy at home: Making small changes to the way you use energy can reduce your carbon footprint as well as saving money. Even small things make a big difference. Like turning off the lights when you leave a room, turning off your appliances at the wall rather than leaving them on standby, boiling your kettle with only as much water as you need, and drawing the curtains at night to stop the heat escaping. When Labour was in government we set up the ‘Warm Front’ scheme to properly insulate homes but the Tory-Lib Dem Government scrapped it. The next Labour government will have a major push on home insulation with at least 5 million homes upgraded over 10 years, saving the average household more than £270 a year in energy bills.

*Safer cycling: Cycling is a good thing. As well as being great exercise and a cheap way to travel, it cuts down on traffic jams and pollution. But cycling needs to be safer. Labour will make cycling safer in London and throughout the country. We have put forward a plan for tough new safety rules for HGVs. And in Southwark we want a ‘safe cycling hour’ with lorries banned from the roads at rush hour.

*Tackling environmental problems globally. The last Labour Government made progress in tackling climate change not just in the UK, but working with other governments in Europe and globally, and helping developing countries to develop more sustainably. More than ever Britain and the world need leadership on tackling the key global issues - climate change, poverty and inequality. 2015 is an important year for international action with a series of summits and conferences that can shape our future. Labour will seek a binding international agreement on climate change and global targets for cutting carbon emissions.

*The print version of this article is slightly shorter.

Sometimes it seems that environmental challenges like global warming are so big we can’t possibly do anything about them as individuals. Or we are so busy and stressed in our...

Yesterday, Monday 26th January, MPs voted on the Infrastructure Bill.  Labour took the opportunity to put forward a series of important amendments to protect communities and ensure that fracking does not take place without proper restrictions and robust regulations.  We welcome the Government’s decision, having previously ignored legitimate environmental concerns, to accept Labour’s proposals to tighten fracking regulations.

My view is that shale gas extraction should only go ahead if there is robust regulation, comprehensive monitoring and strict enforcement, and in a way which is consistent with decarbonising our electricity supply by 2030.  It is disappointing that so far, the Government has failed to listen to legitimate environmental concerns that have been raised about the extraction of shale gas.

One of the key concerns people in Camberwell and Peckham have raised with me is about underground access rights.  Currently, other activities which involve drilling or excavating horizontally in this way have deep-level land access rights, including coal mining or the laying of gas, water or sewage pipes.  These rights enable operators to access deep-level land without having to acquire permission from the landholder above.

Shale gas, however, is not currently covered by these existing rights.  This means that, at present, a shale gas operator has to seek permission from each individual landholder for drilling operations at all depths.  The Government is proposing that for shale gas operations taking place at 300m or deeper, no permission is required.  For surface access the company will still have to obtain a right of access from the owner of the land.

The conditions we believe must be met before fracking can take place are as follows:

Only by fully addressing legitimate concerns about fracking with robust regulation, comprehensive monitoring and strict enforcement can people have confidence that the extraction of shale gas is safe and reliable.

As the Infrastructure Bill makes its way through Parliament, Labour will continue to hold the Government to account and ensure the important changes we made to the Bill stay in place.

Fracking must not go ahead without robust regulations and restrictions

Yesterday, Monday 26th January, MPs voted on the Infrastructure Bill.  Labour took the opportunity to put forward a series of important amendments to protect communities and ensure that fracking does... 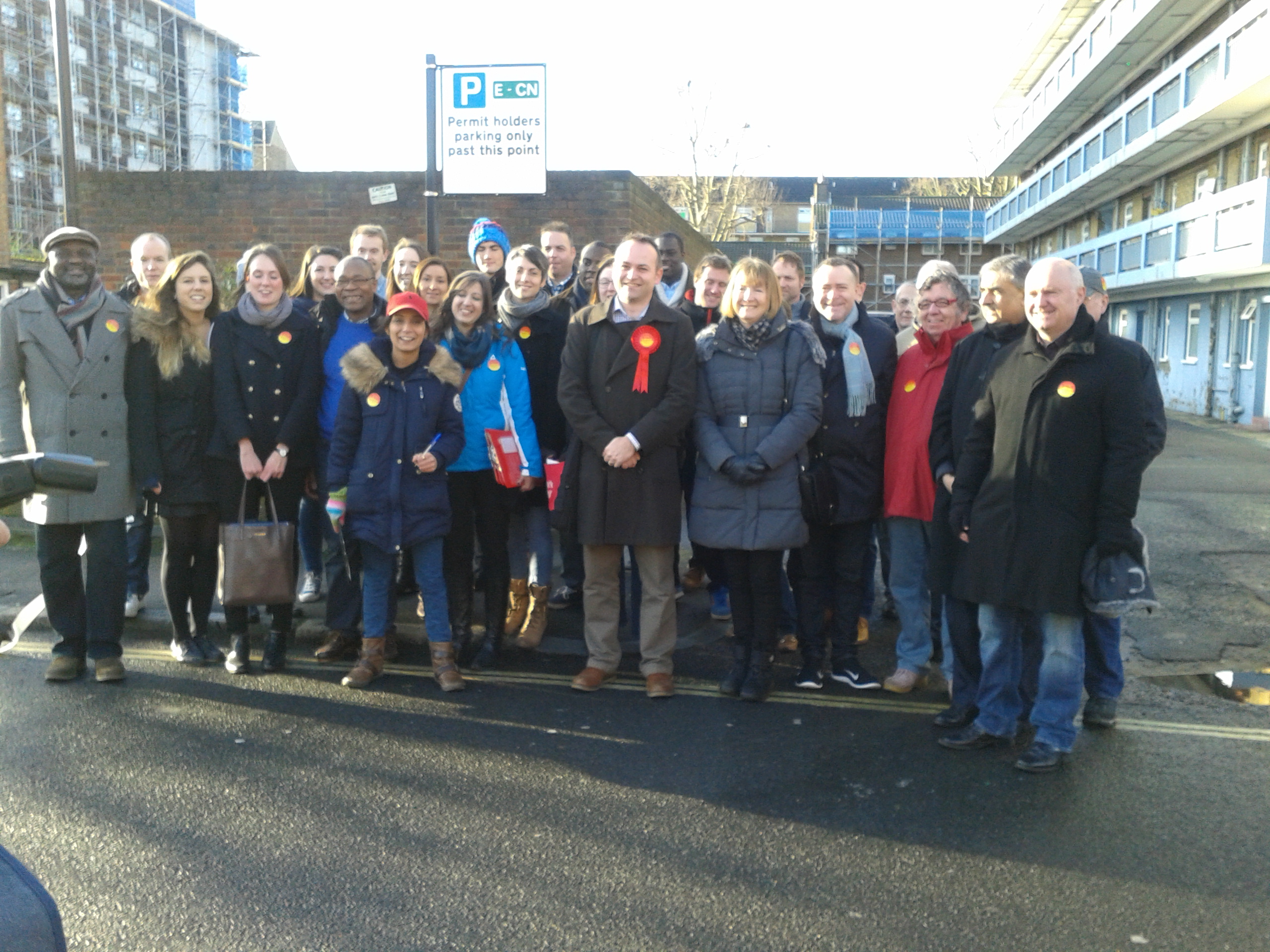 You can read my monthly newsletter for December 2014 to January 2015 here.

You can read my monthly newsletter for December 2014 to January 2015 here.